The density of snowshoe hares reveals information about forest ecosystems 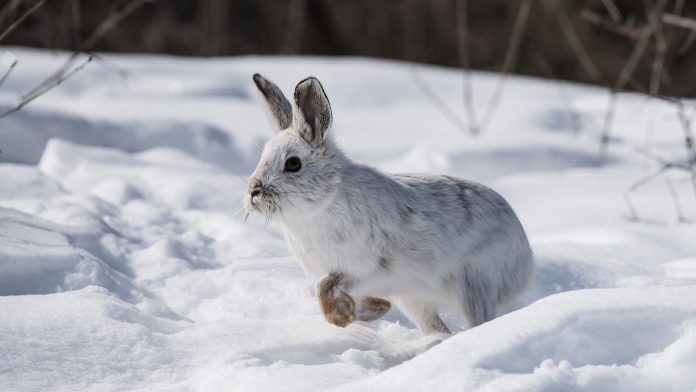 Scientists utilise new camera trapping methods to reveal the density of snowshoe hares, and what that data reflects about other animal communities and the habitats they live in.

The number of hares in a forest is a good indicator of how healthy an ecosystem is, and now with advances in technology there is a better way to find this information out.

A new study in the Journal of Mammalogy reveals that recently developed camera-trapping methods could be a viable alternative to live-trapping for determining the density of snowshoe hares and other small mammals that play a critical role in any forest ecosystem.

“Snowshoe hares are considered a keystone, boreal forest species and there’s been some evidence that hare populations are changing as the climate warms,” explained Dan Thornton, study co-author and assistant professor in the WSU School of the Environment. “Currently, the only reliable method of determining how many snowshoe hares are in a forest is live-trapping which is expensive, requires a lot of manpower and can potentially harm the animals.”

Using cameras to determine the number of animals in any given area is not new in and of itself. Scientists such as Thornton have used cameras to detect the presence and population density of large cats such as the Canadian lynx for years.

However, this work has been possible because large cats have distinguishing spots and other markings on their fur that enable scientists to differentiate between individuals. On the other hand, snowshoe hares and many other mammals have unmarked coats which has made it extremely difficult to determine one individual from another with traditional camera-trapping methods.

Recently developed analytical models that extract information from photographs such as animal speed and location have demonstrated promise in estimating the density of unmarked animals such as hares. However, these methods have not been validated in many wild ecosystems, leaving the question of whether they will prove reliable open to debate.

In response to this question, Thornton and Paul Jensen, a former master’s student in the WSU School of the Environment, designed a large-scale field test to determine the density of snowshoe hares at 13 different sites located in the Loomis State Forest and Colville National Forest on the eastern edge of the North Cascades in Washington.

The researchers trekked deep into the wilderness to set up live traps and camera traps for the experiment, which was conducted during the summer of 2019. In addition to trapping an estimate of 770 snowshoe hares, they collected 13,608 camera trap photos.

“We had to live trap the hares to establish a baseline population estimate for our experiment. It’s an incredible amount of work and involves a lot of people,” Thornton explained. “Even just getting out to these remote areas where there are no roads is exceedingly difficult. The process really makes you appreciate how manpower, and cost-intensive this kind of work actually is.”

Thornton and colleagues then analysed both their live-trapping and camera-trapping data to determine an average number of snowshoe hares in each plot of forestland. Overall, their work revealed that density estimates from the cameras had an 86% correlation with live trapping data

“Until now, cameras could only really tell us if the hares are there or not there,” Thornton added. “This study really opens up the door to using cameras to get population estimates for snowshoe hares and potentially a whole lot of other unmarked, small animal species.”

The future of these camera trapping methods

Moving forward, the researchers plan to validate their camera trapping methods in an even larger scale experiment and possibly in different ecosystems as well.

Their work could ultimately play a critical role in helping to map out and reveal more data of not only the health of snowshoe hares but also other animal communities as well as the forests themselves.

“This study comes out as rapidly changing climatic conditions are altering our natural plant and animal communities worldwide,” Thornton concluded. “Having an inexpensive and non-invasive way to monitor the health of snowshoe hares and other animal populations will give us a window into forest health that will prove valuable in the years ahead.”