As the raw material shortage heightens and global supply chains get more vulnerable, the highly competitive race to secure next-generation battery technologies just got started. The lack of standardised data-quality is hindering the entire market from understanding these complex systems.

Battery makers and battery buyers alike are racing to understand next-generation battery technologies. The end goal is to achieve batteries that can store more energy, are cheaper, faster to charge and less vulnerable to raw material shortages. Whoever succeeds in doing so first will have a major advantage. It is a ‘winner-takes-it-all’ game.

European automakers and producers of battery material and cells have understood that the race for batteries is not lost yet, but rather provides an enormous business opportunity. The new, unprecedented demand for batteries, combined with stress on the highly sophisticated but vulnerable global value chains, has led to an explosion of ‘local’ battery production, in the form of massive gigafactory projects in Europe. With more than 30 gigafactory projects, Europe is now set to become the second-largest battery cell producer in the world (Fig. 1 ).

Tesla’s former CTO, JB Straubel, explained why the need for local production is essential to not run into heavy supply issues, stating: “They (the OEMs) are all saying that they are switching to electric at the same time. I do think we are going to have a really painful time at it. It’s not going to be just a battery shortage; it is going to ripple through the whole supply chain. There will be nickel shortage, cathode shortage, and maybe one day even separator shortage.”

But the classic lithium-ion (Li-ion) battery is reaching its physical limitations. Therefore, great hope lies in a new generation of batteries (next generation batteries) that are based on new concepts and chemistries, to store more energy, charge faster, yield higher safety and ultimately can be produced at a cheaper price.

The production of high-performance and safe batteries is one ambitious goal. Delivering that with minimal variance in production is the even bigger challenge – especially for next-generation batteries.

Aside from the massive business opportunity for Europe’s battery manufacturing value chain, this situation also has long-reaching implications for the battery buyers – mainly related to expected higher variance in quality.

Companies that need to integrate battery cells or packs into their products, such as power tool manufacturers or urban mobility providers, will be forced to invest in strategies to manage and mitigate the resulting risk for their own production. For them, batteries have evolved to be a new but integral value driver. However, often their knowledge, especially when it comes to next-generation energy storage technologies, is rather limited. 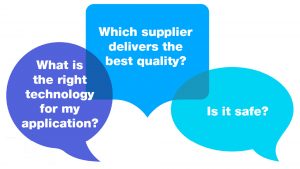 In fact, it is quite challenging for most to build up the necessary knowhow fast enough – due to massive CAPEX investments and scarce talent.

But batteries are imminent to many development departments, which are often left with no choice than to blindly trust the published performance promises and safety specifications, to not limit their battery-powered product innovations.

The chemical makeup of batteries  – a technical subject that was once the realm reserved for intellectual scientists and engineers  –  has become one of the most popular topics of discussion in the corporate boardrooms of automotive producers, material suppliers, power tool manufacturers, and governmental parliaments.

The battery has become such an integral part of the value creation that there is, for most businesses, no more way around that topic. And with the classic Li-ion battery reaching its limits, the need for new market opportunities is driving decision makers.

In the near future, the ability to understand and master next-generation battery technologies could make the difference between victory and defeat in a large number of markets and determine if we really win the race against global warming – transforming our world into a more sustainable place.

But for companies, the battery is often much more than just ‘a component’. The importance of a battery has drastically increased, from being a component commodity, to a competitive differentiator, a value driver, and even a brand-determining key element.

Therefore, all major industry players are taking a crash course in battery chemistry, trying to in-source more battery knowledge, because the importance of the battery system in their product is rising exponentially.

Battery producers and battery buyers alike must collectively determine how to develop; scale; and, ultimately, manufacture and integrate batteries in a cheaper and better way. Today, for example, batteries can make up a quarter to a third of the cost of electric cars – which is unacceptable from a profitability standpoint. In addition, most of those batteries are full of scarce materials, and undergo toxic, energy-consuming production processes.

The star at the horizon: Solid-state batteries

Besides heavy engineering efforts that optimise the battery design and integration, the most immediate change being brought in is in the chemical building blocks of batteries. The term ‘next-generation batteries’ summarises all technological approaches that are intended to meet the spiked demand in powerful, affordable, and sustainable batteries through a new chemical setup, such as silicon anodes, 3D structures, lithium-sulfur, sodium-ion batteries or solid-state batteries (SSB). Whereas most of these concepts will deliver incremental improvements, the solid-state battery is potentially the holy grail that could solve performance and safety related issues at the same time.

This is also reflected in the fast-growing start-up scene, where solid-state battery ventures make up a big part. With evolutions in the billions, Factorial Energy, Prologium and many others, such as Solid Power and QuantumScape, are aiming to revolutionise the way batteries are constructed, including their ingredients and their fundamental design.

Solid-state batteries do not have a liquid, flammable and toxic electrolyte and, thus, have a larger energy capacity and charge faster. A lot of big players in the industry have therefore placed big bets on solid-state technology. Volkswagen has invested over $300m in QuantumScape, based in San Jose, Calif. BMW and Ford are wagering on Solid Power in Louisville, Colo. General Motors has invested in SES AI Corporation, which emerged from the Massachusetts Institute of Technology and is based in Woburn.

It is not, however, clear how soon solid-state batteries will arrive. Promises of product releases range from 2022 to 2030, as illustrated in Fig. 2.

For this technology to be commercially available, many fundamental as well as upscaling challenges have to be resolved. It is majorly challenging and requires a holistic approach.

Standardised test data as a key enabler of success

Researching and developing these next-generation material chemistries is challenging and therefore requires a new, more comprehensive type of testing. New parameters, such as stacking pressure, volume expansion and temperature, have a fundamental influence on cell performance. Data about these parameters are rare because they cannot be easily recorded or controlled with classical battery test equipment, like coin or simple pouch cells. But simply ignoring it – by not measuring – does not solve the problem.

The big challenge when developing new battery technologies is twofold: one needs to solve the fundamental, chemical and physical challenges of new battery materials, whilst, almost simultaneously, considering how to scale the technology into industrial manufacturing processes.

When looking at this challenge, it becomes evident that a strong exchange between fundamental research, often carried out in academic institutions, and industrial development is crucial. However, this is where a large bottleneck lies. This gap between the two worlds has been referred to as the ‘Valley of Death’, because what has been discovered in academia is often hard to transfer to industry.

A major publication in the American journal JACS recently publicly noted that the ‘Valley of Death’ is a result of missing standards in fundamental research and industry, stating: “The community should work on standardised experimental setups and protocols for cell testing that go beyond the currently established (or rather not well established) standard.”

This impressively demonstrates what has been known in this field for decades: we lack test standardisation of battery performance, which is of great importance for advancing and scaling new battery technologies.

Data standardisation is not only key to facilitating data sharing between academia and industry, it is also indispensable for accelerating fundamental research – especially in next-generation batteries. This specific problem for solid state battery research was recently addressed in a study published in the highly regarded Nature Energy journal, that revealed that: “With a survey of the solid-state-battery literature, it is evident that a comparison of cell performance is not always directly accessible.”

To resolve this challenge, the team at Sphere Energy (Fig. 3) set out to create a new standardised way to acquire, analyse, and make available high-quality battery performance data. Sphere Energy provides innovative test equipment (Fig. 4) for R&D institutions and offers testing, certification and benchmarking services for battery makers as well as battery buyers. This allows for efficient data sharing throughout the battery value chain and finally delivers transparency into the complex and confusing battery supply market.

The origin of the data standardisation problem is illustrated in the image below (Fig. 5), showing a variety of home-build test cells classically used in R&D facilities, often leading to challenges in reproducibility and reliability, hence hindering technology transfer. The company’s aim is to carry out performance tests while controlling all of the relevant performance parameters in a single setup. This new standardised way of testing batteries is also the first step towards closing the gap between academic R&D and industry by enabling a better data exchange and upscaling the production of new materials faster by leveraging data coming from various sources.

As a company, Sphere Energy dedicates all its efforts to support battery producers in showcasing their outstanding technology and support battery buyers in their procurement and engineering process as an unbiased performance, safety and quality data provider. With continual developments towards its mission to close the gap between lab-based discoveries and commercialisation, Sphere Energy is well-positioned to help all those in the industry stay one step ahead in the race to achieve next-generation battery technology.

The future of battery technology

The commercialisation of next-generation batteries is extremely difficult. Solving the fundamental material issues is a massive challenge by itself, but mass production of these technologies is a herculean task.

This can only be done with joint forces and intensive collaborations between various disciplines from academia and industry. All those with a vested interest in optimising the available battery technology must be able to rely on accurate data. Therefore, the field needs trusted and innovative testing technology, as well as new standards, to assist in their own R&D process and also create a global, trustworthy database, which will allow us to collaboratively strive toward this urgent goal.

Researchers have found a way to improve the efficiency of low-cost solar cells, aiding the global transition to clean energy.
Read more

The French Government will provide €114m in funding to McPhy Energy to ramp up the development of its Gigafactory project.
Read more