The shape of melting ice depends on the water temperature 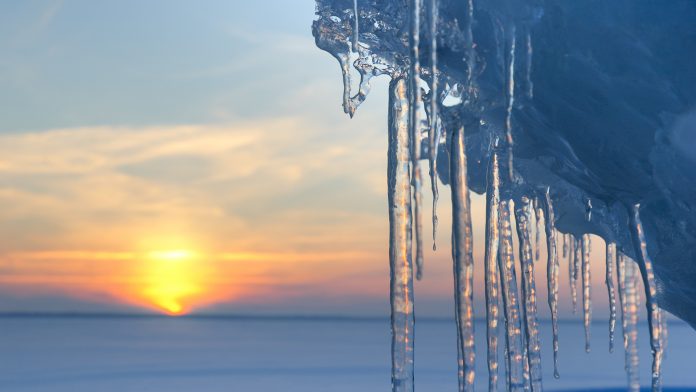 Scientists analyse the different melting patterns of ice, discovering that the shape of melting ice is influenced by the temperature of the water.

A team of mathematicians and physicists have discovered how ice formations are shaped by external forces, such as water temperature. Their newly published research may offer another means for gauging factors that cause ice to melt.

“The shapes and patterning of ice are sensitive indicators of the environmental conditions at which it melted, allowing us to ‘read’ the shape to infer factors such as the ambient water temperature,” explained Leif Ristroph, an associate professor at New York University’s Courant Institute of Mathematical Sciences and one of the authors of the paper, which appears in the journal Physical Review Letters.

“Our work helps to understand how melting induces unusual flow patterns that in turn affect melting, which is one of the many complexities affecting the ice on our planet,” added author Alexandra Zidovska, an associate professor in NYU’s Department of Physics.

The paper’s other authors were Scott Weady, an NYU graduate student, and Josh Tong, an undergraduate in NYU’s College of Arts and Science at the time of the study.

In NYU’s Applied Mathematics Laboratory and Center for Soft Matter Research, the researchers studied, through a series of experiments, the melting of ice in water. They foregrounded their research specifically on how the water temperature impacts the eventual shapes and patterning of ice.

To do so, they created ultra-pure ice, which is free of bubbles and other impurities. The team recorded the melting of ice submerged into water tanks in a ‘cold room’, which is similar to a walk-in refrigerator, where the temperature is manually controlled and varied.

“We focused on the cold temperatures—0 oC to 10 oC —at which ice in natural waters typically melts, and we found a surprising variety of shapes that formed,” explained Ristroph, who directs the Applied Mathematics Laboratory.

At very cold temperatures, specifically those under about 5 oC, the pieces take on the shape of a spike or ‘pinnacle’ pointing downward, which is similar to an icicle, but perfectly smooth (with no ripples). For temperatures above approximately 7 oC, the same basic shape forms, but upside down; a spike pointing upward.

For temperatures in between, the ice has wavy and rippled patterns melted into its surface. Similar patterns, called ‘scallops’ can be found on icebergs and other ice-covered surfaces in nature. These shape differences are due to changes in water flows, which are determined by their temperatures.

“Melting causes gradients in the temperature of the water near the ice, which causes the liquid at different places to have different densities,” added Weady. “This generates flows due to gravity—with heavier liquid sinking and lighter fluid rising—and such flows along the surface lead to different rates of melting at different locations and thus changes in shape.”

“The strange bit of physics is that liquid water has a highly unusual dependence of density on temperature, in particular a maximum of density at about 4 oC. This ‘density anomaly’ makes water unique in comparison to other fluids,” commented Weady.

This research indicates that the property is responsible for producing very different flows, depending on the precise value of the water temperature. The downward pinnacles at low temperatures are associated with upward flows, while the upward pinnacles have downward flows. The scalloped patterns form because upward flows that are near the surface interact with downward flows further away, destabilising into vortices that carve pits into the ice.

“Our findings help to explain some characteristic shapes of ice seen in nature, specifically the so-called pinnacle morphology of icebergs that consists of sharp spikes or spires and the so-called scallops that consist of wavy patterns of pits,” concluded Ristroph.

“The bigger context for this work relates to the changing climate of the Earth and the increased rate of ice melting across our planet. It is important to better understand the detailed physics and math of melting at smaller scales, since these are key components of larger-scale climate models.”