The sound of a healthy herd: Acoustic technology for dairy farmers 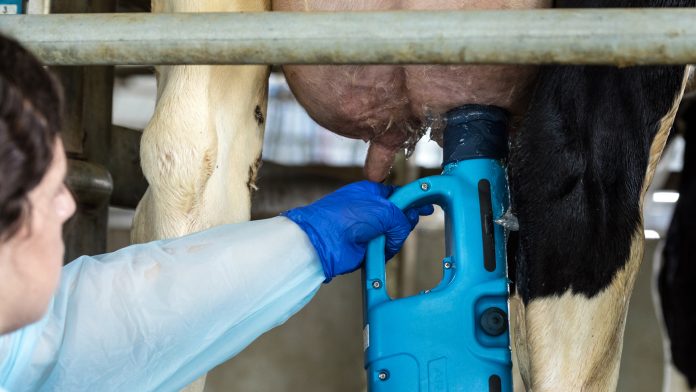 Armenta spoke to Innovation News Network about how they have developed a revolutionary non-invasive and antibiotics-free therapy for dairy cattle.

IT is no secret to dairy farmers that having unhealthy cows can be costly. Treatment expenses, poor quality milk, reduced yield per animal, and increased culling all create a major economic burden. Clinical and subclinical mammary infections alone affect between 20- 40% of dairy cows, causing more than $4bn in lost annual revenue in the United States and the European Union (EU).

Traditional treatments involve the use of antibiotics; however, these typically have poor rates of success and can have serious long-term consequences. This is because antibiotics primarily address the symptoms and as a result, do not heal the animal completely; rather, they tend to weaken the animal’s immune system, making it more susceptible to future infections which are then treated with the same methods. This creates a cycle of progressive deterioration in the cow’s resistance to illness, shortening its productive life as a dairy animal. Moreover, any milk drawn following antibiotic treatments must be disposed of, as it is considered to still be contaminated. Therefore, collectively this means that the practical average herd life an American cow is only approximately 2.5 lactations, out of a theoretical maximum potential of 15 to 20.

This outcome is clearly unsatisfactory and undermines farm profitability. However more importantly, the continued use of antibiotics in the treatment and prevention of infections among dairy cows fosters anti-microbial resistance (AMR) – the ability of a bacteria to become resistant to antibiotics – which in turn has hazardous consequences for human health due to AMR bacteria or genes transferring resistance to pathogenic bacteria. In addition to the direct impact on human and animal health, AMR proliferation carries a heavy economic burden due to higher costs of treatment and reduced productivity as a result of illness. In the EU alone, AMR is responsible for an estimated 33,000 deaths per year and €1.5bn in annual healthcare costs and lost productivity.

The Centers for Disease Control and Prevention (CDC) recently released a study, ‘Antibiotic Resistance Threats in the US 2019’, showing that antibiotic-resistant bacteria and fungi cause more than 2.8 million infections and 35,000 deaths in the United States each year. Growing awareness of these risks is triggering global restrictions on the use of antibiotics among livestock, including legislation that seriously increases the costs of dairy farming.
Clearly, using antibiotics to treat and prevent bovine mastitis is becoming more and more burdensome. So far, however, farmers have passively accepted the situation and adapted to shrinking profits or have gone out of business. Yet, thanks to a game-changing innovation developed by Armenta, based in Israel, it does not have to be that way.

With the understanding that bovine mastitis is the most widespread and impactful disease affecting dairy farming today, Armenta Ltd., established in 2018, set out to develop a safe, cost-effective, and easy-to-use treatment. The result was a revolutionary non-invasive and antibiotics-free therapy that is in the process of transforming the standard of care for dairy cattle.

Developed by engineers, researchers, healthcare experts, veterinarians, and current and retired dairy farm operators, the Armenta solution is producing unprecedented results. With a few short treatments, it has been proven to increase milk yield and quality and reduce culling.

How does acoustic pulse technology work?

Armenta’s innovation begins with acoustic pulse technology (APT). Also known as shockwave therapy, APT has been in use for more than 20 years for the treatment of inflammatory and ischemic diseases in human healthcare (in orthopaedics, physiotherapy, sports medicine, and urology), as well as in veterinary medicine. It has been shown to speed up recovery from infections and injuries by producing new blood vessels, reducing inflammation and improving tissue functioning, alongside other long-term positive effects.
Shockwaves are ‘mechanical’ waves, whose shape is characterised by an initial positive and very rapid phase of high amplitude, followed microseconds later by a sudden phase of mild negative pressure, and then a return to the ambient (basic) status. Certain biological cells interact with these shockwaves, converting mechanical stimuli into biochemical responses.
Important cellular functions such as migration, proliferation, differentiation and apoptosis are affected, resulting in the remodelling, growth or creation of arterioles in people and animals. The new or more robust blood vessels improve blood supply and oxygenation of the treated area and as a result, accelerate the body’s own healing mechanisms. In other words, APT helps the body heal itself.

Although they are effective, all the APT devices in use today in hospitals and clinics are large, bulky, high maintenance, and costly. They consume a lot of energy across high voltage power lines, require expensive spare parts and consumables, and take a team to operate. The technology is also traditionally used to treat small, very focused areas. These issues have posed significant challenges in expanding APT to the treatment of herd animals on farms and ranches.

From the clinical environment to the real-world dairy farm

To overcome this, Armenta decided to create an innovation that addressed a four-fold challenge in transferring APT from the clinical environment to the real-world dairy farm: size, power, simplicity, and treatment area. The solution was the APT-X, a completely unique, simple-to-use, lightweight, mobile device that puts powerful APT technology right in the farmer’s hand.

The hand-held APT-X generates therapeutic pulses using high-compressed air as a power source and treats an area 1,000 times larger than any other APT-based device in use today. Applied directly to a dairy cow’s udder three times over the course of a single week, for just three minutes each session, the APT-X stimulates the cow’s immune system in a large, deep area of the mastitis-affected udder, helping it fight bacteria on its own.

Armenta CEO, Gil Hakim, said: “With our patented APT-X technology, the healing process is fast, easily tolerable, antibiotic-free and produces no side-effects – exactly the way nature intended. For the dairy farmer, the treatment process is user-friendly and cost-effective in several distinct ways.

“First, the device itself is compact and does not require extensive high-power electricity lines to operate. Second, the course of treatment is brief and rapidly effective, increasing milk yield. Third, after therapy, the milk is immediately consumable and passes no harmful contaminants to consumers. And fourth, the cow suffers no ill effects and she can continue to produce more milk for much longer than a cow treated with antibiotics.”

The sound of a healthy herd

In field studies involving more than 850 dairy cows in nine different countries, Armenta’s APT-based solution was used to treat clinical and subclinical mastitis, with unmistakable results – over 70% recovery rates (normalised SCC and infection-free) and an increased milk yield of around 10% or more. These numbers were remarkably consistent with the academic paper by Professor Gabriel Leitner on APT use for treating bovine mastitis published one year previously.

According to the farmers and veterinarians involved in the field treatments, the APT equipment was extremely user-friendly and comfortable, and performed very well. The treatments were simple to administer, and the animals displayed no resistance, remaining calm for the duration of the treatment. “With 70% of the treated animals showing a decrease in SCC, APT appears to be a viable alternative in the treatment of mastitis in dairy cattle,” said Dr Todd Whitehead, DVM, who was involved in the field study in Phoenix, Arizona. Moreover, the unprecedented improvements in productivity and animal welfare led to an 80% reduction in culling rates. Naturally, this major improvement, along with the increased milk yield and quality, contributed to a measurable and rapid increase in farm profitability.

Armenta has clearly demonstrated that it is possible to decisively tackle the challenging global problem of bovine mastitis quickly, easily, cost-effectively, and without antibiotics. The outcome is healthier cows, better milk for consumers, and more economically viable dairy farms.

On the front lines

Since the first scientific article published in 2018 which reviewed the use of an APT-based hand-held device to treat bovine mastitis without antibiotics, Armenta has shared the results of its innovative approach in professional forums both in Europe and the United States. Farmers, government agencies, and potential business partners have shown increasing interest in Armenta’s successes, recognising the importance of reducing the use of antibiotics and the economic benefits of integrating APT into dairy farming.
Most recently, Armenta has been selected for funding in the context of the EU Framework Programme for Research and Innovation, known as Horizon 2020. The program is the financial instrument for implementing the Innovation Union, a flagship initiative aimed at securing Europe’s global competitiveness. It is the largest effort of its kind, with nearly €80bn of funding available over seven years, in addition to private investments that it attracts. At time of writing, Armenta is in the process of preparing to sign the Horizon 2020 grant agreement with the EU.

Armenta has also joined the front lines of the Antimicrobial Resistance (AMR) Challenge. It is an American initiative launched at the United Nations to encourage governments, companies, and NGOs worldwide to collaborate against antimicrobial resistance. Hakim said: “Armenta supports the AMR Challenge’s ‘One Health’ approach, recognising the link between the health of people, animals and the environment, as reflected in our ongoing development of novel treatments for the most pervasive dairy cattle diseases.”

Looking ahead, Hakim sees Armenta’s trajectory as one of ongoing growth, as the company develops additional alternative therapies to treat other inflammatory diseases affecting herd health and farm profitability, as well as leading the efforts to prevent the spread of antibiotic resistance. This includes expanding dairy cow udder care to include dry-period therapy and low-yield heifers to further increase milk production and herd life and productivity. In addition to this, Armenta will be developing broader applications of its ground-breaking technology to treat reproductive disorders and lameness among cattle, as well as to improve herd health management among other livestock.

Researchers have performed a quantitative assessment of intercropping systems by analysing the results of 226 agricultural experiments.
Read more

Solving the fertiliser crisis by bringing the solution home