The Therapeutic Ultrasound Network for Drug Delivery and Ablation Research 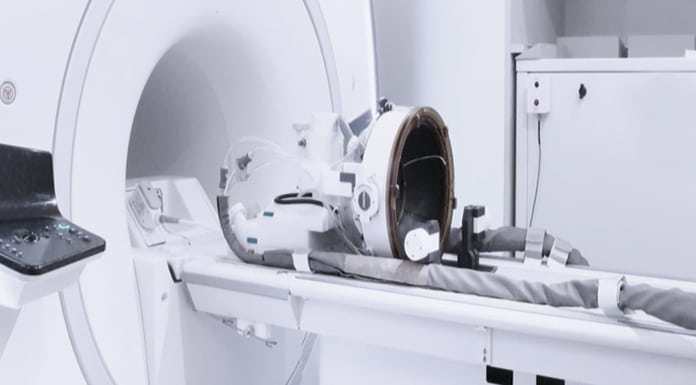 Professor Gail ter Haar, leader of the Therapeutic Ultrasound Team at The Institute of Cancer Research, UK reflects on the impressive potential of therapeutic ultrasound and the barriers to its widespread clinical adoption.

Most people will be familiar with the ultrasound scans that often accompany the first announcement of a pregnancy to a wider family group. These are performed with the expectation that they are safe, the ultrasound exposure having no untoward consequences for the unborn baby. However, if the amount of energy used is increased, or delivered in a different fashion, biological effects can be induced, and at high enough levels, cells may be killed. These biological effects can now be harnessed for therapeutic benefit. Therapeutic ultrasound (ThUS) has enormous potential as a minimally invasive treatment modality, with current applications ranging from the treatment of cancer and stroke to fracture healing and neuromodulation. It is uniquely versatile, offering the ability to thermally ablate tissue, to mechanically fragment it or to enhance drug delivery, depending on the way in which the acoustic energy is delivered. However, despite highly promising initial trials and its considerable advantages in terms of cost and patient safety, widespread clinical adoption is slow.

The UK’s Engineering and Physical Sciences Research Council (EPSRC) has funded a network, the Therapeutic Ultrasound Network for Drug Delivery and Ablation Research (ThUNDDAR), the main focus of which is to inform the clinical community of the existence of therapy ultrasound techniques and to stimulate the translational research that will enable their potential to be fully realised.

Speaking to Innovation News Network, Professor Gail ter Haar, leader of the Therapeutic Ultrasound Team at The Institute of Cancer Research, UK, reflects on the advantages of this promising approach, the hurdles left to be overcome, and the role of ThUNDDAR moving forwards.

The two broad main areas currently under most active investigation by those interested in exploiting therapeutic ultrasound’s potential are in brain (both malignant and benign conditions) and for cancer in general (both for palliation and ‘cure’), although a number of other applications are also under investigation, such as, for example, in foetal medicine and in relief of pain.

There is overlap in many of the desired effects being sought from therapeutic ultrasound in these applications. At sufficiently high acoustic powers, a highly focused beam can be used to thermally ablate tissue volumes by inducing temperatures in the region of 55°C held for times of ~1 second. This results in instantaneous cell death. These tissue regions lie solely in the focal volume, with overlying and surrounding tissues being spared. This is a truly non-invasive technique as the focus can lie deep in the body, while the ultrasound source is outside it. Commonly referred to as HIFU (high intensity focused ultrasound) or FUS (focused ultrasound surgery), this thermal ablation can be used to destroy accessible tumours with the aim of producing a cure, or of debulking large tumours in order to allow other therapies to become more effective. It has been explored in treatment of cancers in the liver, kidneys, pancreas, prostate, and brain. It has also been used for treating movement disorders (for example, essential tremor) where highly specific brain regions must be destroyed. The remaining challenges lie in finding inexpensive rapid methods for monitoring the treatment in real time, and in refining the ultrasound energy sources (transducers) for specific applications. While HIFU in the brain, and in some other cancers, is carried out clinically using magnetic resonance imaging (MRI), the refinement of simpler monitoring techniques, such as those based on ultrasound, which can be used away from major imaging centres, continues.

Ultrasound is a pressure wave, and where pressure amplitudes are sufficiently high, tissue fractionation (histotripsy) occurs. This can emulsify the cells in the focal region, again producing instantaneous cell death. This has been found to be useful, for example for destroying regions in kidneys, liver and prostate, and in cardiac applications where a discrete septal opening is required. Recently, it has also been shown that short histotripsy-type pulses can stimulate an immune response, most probably by releasing factors into the blood stream as tumour cells are disrupted.

An ultrasound pressure wave leads to oscillations of microbubbles lying in its path. This bubble activity is known to as acoustic cavitation, with gentle repetitive oscillations being referred to as stable cavitation and the more violent growth and collapse being known as inertial cavitation. The bubbles may be drawn out of the tissue or may be deliberately introduced, usually in the form of ultrasound contrast agents. Inertial cavitation is responsible for the tissue fractionation seen in histotripsy, but the stable oscillations of bubbles play an important role in enhancing drug uptake. While the mechanism for this is not fully understood, it is presumed that these bubbles change the permeability of the blood vessels in which they sit. This can lead to transient opening of the blood brain barrier (BBB) or to an increase in the amount of cytotoxic drug seen in a tumour. There is considerable interest in this as, for the first time, it allows, for example, drugs designed to treat Alzheimer’s disease to cross the BBB, or it can allow a reduction in dose of a chemotherapeutic agent for cancer treatment, thus potentially reducing side effects.

At low acoustic outputs, therapeutic ultrasound is being explored for neuromodulation and also for the selective heating of drug-filled vesicles that are designed to release their payload only in regions that are held at a required temperature, such as, for example, at the focus of an ultrasound beam whose source is outside the body.

What do you feel are the biggest barriers to a more widespread clinical adoption, and how can they be overcome?

Despite highly promising initial clinical trials and ThUS’s considerable advantages in terms of cost and patient safety, widespread clinical adoption has been hindered by a combination of factors. These include:

However, perhaps the greatest barrier at present is the lack of weight of clinical evidence for therapeutic ultrasound’s efficacy. This is required not only to sway clinical opinion but also to allow regulatory approval. This is a ‘chicken and egg’ situation.

Considerable investment in time and money is needed to set up the required multicentric clinical trials. Without the necessary evidence this investment is hard to attract, and it is difficult to recruit sufficient centres, especially as therapy ultrasound applications are often in competition with other new techniques, such as molecular imaging and therapy. Regulatory authorities are uncertain as to the correct approval route for these devices, especially when the combination of new ultrasound techniques with new drug approaches is proposed.

The activities of ThUNDDAR have been designed to stimulate and promote collaborations which will address these issues and to draw together relevant interested parties.

How important is an interdisciplinary approach? How difficult is this to achieve and maintain?

An interdisciplinary approach is essential: this field cannot progress without close collaboration between specialists in the physical and biological sciences. Preclinically, novel approaches come from, for example, physicists, engineers, biologists, chemists, immunologists, and pharmacologists working together. It is necessary to understand the physics of the interaction of ultrasonic waves with tissue structures, and with bubbles, to be able to construct devices that can deliver specific ultrasound exposures and to develop vehicles that can promote the locally enhanced deposition of, for example, cytotoxic drugs. Current clinical treatments require the involvement of the referring clinician (usually a neurosurgeon or oncologist), a radiologist, and a radiographer to define the treatment position and deliver the treatment, a physicist or engineer to advise on the exposure conditions, and an anaesthetic team. In busy hospitals, it can require considerable forward planning to assemble such a team. Each specialist plays an essential role in the successful delivery of the treatment.

What have been ThUNDDAR’s biggest achievements so far?

ThUNDDAR has provided seed funding for a number of pilot projects. This has allowed groups that have not previously worked together to develop innovative ideas and to obtain pilot results that will allow them to apply for larger grants from more conventional funding bodies.

We have also held events that have drawn together industry, clinicians, and academics with the aim of introducing these groups to the potential of therapy ultrasound. These have been well attended, and although they have been effective at introducing and informing people, keeping up the momentum from such initiatives is very time-consuming and difficult. At a time when all practitioners in the NHS are being pushed more and more to deliver more and more work in all aspects without any change in funding, this type of initiative becomes more challenging to bring to a successful conclusion.

Where will your future priorities lie?

We will continue to fund pilot projects as the field will not progress without drawing new blood into it. We also have plans to hold joint meetings with other disciplines and networks. An example of this is our planned meeting which will be co-hosted with the EPSRC Image-Guided Therapies UK Network+.

We are present at relevant clinical conferences, offering to run sessions and to provide expert lecturers as, and when, appropriate. It is key that the wider community understands the considerable promise that therapy ultrasound can offer in its many guises.

The Institute of Cancer Research