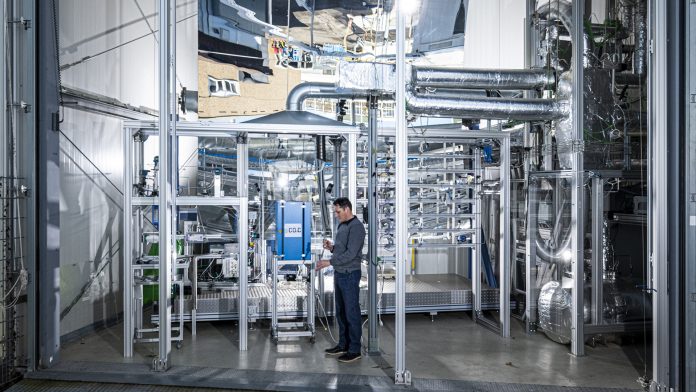 A new combined facility at Karlsruhe Institute of Technology (KIT) has successfully removed the greenhouse gas CO2 from the atmosphere and turned it into stable carbon.

The NECOC research project included collaborations with industry partners to develop this process, which combines negative emissions with the production of a high-tech resource. After producing a stable carbon at the testing stage, the facility will be optimised energetically and scaled up.

Germany is already making significant progress in terms of climate neutrality; however, the country must close carbon cycles in its industries to get there as soon as possible. To reach the 1.5°C target, the Intergovernmental Panel on Climate Change (IPCC) has suggested removing and permanently storing CO2 that has already been emitted.

“We have to find completely new technological solutions if we want to keep up industrial production,” said Dr Benjamin Dietrich of the KIT Institute of Thermal Process Engineering (TVT). “This includes the industrial carbon supply. Carbon is needed for the production of batteries, building materials, colours, and in the agricultural sector. So far, it comes largely from fossil sources.”

What does the NECOC project involve?

Within the framework of the NECOC research project, a climate-friendly procedure with negative emissions is being developed for the production of high-tech, stable carbon from atmospheric CO2 as an element of carbon management strategy.

The project started at the end of 2019, with the construction of components for three underlying process steps: Direct Air Capture, methanisation, and pyrolysis. After the successful testing of each component, the combined installation was facilitated in 2022 and put into operation at the end of the year.

In the research project, the associated partners KIT, INERATEC, and Climeworks developed a process to convert CO2 from the atmosphere into stable carbon.

“If this carbon remains permanently bound, we successfully combine negative emissions with a component of the post-fossil resource supply as part of a future carbon management strategy. This represents a double contribution to a sustainable future,” Dietrich explained.

In the first project phase, the research team constructed a container-sized test facility, which has now gone into operation. This first-phase installation removes two kilogrammes of CO2 from the ambient air in one day and turns it into 0.5kg of solid, stable carbon.

The NECOC process consists of three steps, with the first using an absorber to separate CO2 from the ambient air as part of a process known as Direct Air Capture. Secondly, CO2 is moved to a microstructured reactor, where it reacts with sustainably produced hydrogen from a connected electrolyser. This is where the third step comes into place. In rising bubbles, a pyrolysis reaction splits the methane molecules, creating hydrogen, which can be returned to split CO2.

Due to the splitting of the molecules, the only remaining part is carbon, which floats on the tin as micro granular and can be removed mechanically on a regular basis. Changing process parameters such as the temperature level allows for the production of different stable carbon modifications like graphite, carbon black, and even graphene.

Scaling the facility for industrial application

The start of the test installation is an important milestone for the NECOC project, as well as the end of the first funding phase. In the second project phase, the NECOC procedure is set to be scaled and optimised for expansion past carbon capture.

“We are planning to make the procedure more energy-efficient by improving the energy recovery from the process heat,” stated project director Dr Leonid Stoppel from the Karlsruhe Liquid Metal Laboratory (KALLA).

He concluded: “We are also looking into an integration of high-temperature heat storages and direct solar heating.”

The future of fusion energy

Caroline Anderson of the Fusion Industry Association details the latest breakthroughs in fusion energy and what this means for its future.
Read more

Bioenergy: The local and truly green source of renewable energy

Dries Acke of SolarPower Europe details Europe’s solar energy outlook and the challenges that need to be addressed to ensure its success.
Read more