University of Cambridge: First to capture image of the Earth’s interior layers 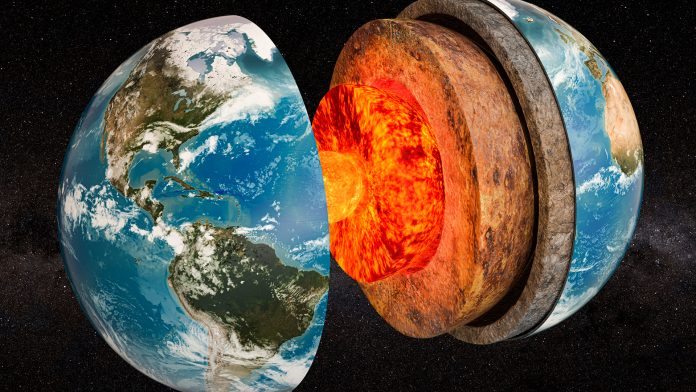 Researchers from the University of Cambridge have captured an image of the Earth’s interior layers, revealing an unusual pocket of rock at the boundary layer, 3,000 kilometres beneath the surface.

The enigmatic area of rock within the Earth’s interior layers is located almost directly beneath the Hawaiian Islands and is one of several ultra-low velocity zones.

This study has been recently published in the journal Nature Communications, and this research is the first to reveal detailed images of the complex internal variability of one of these pockets in the Earth’s interior layers. This allowed scientists to reveal details on the landscape of Earth’s deep interior and the processes operating within it.

“Of all Earth’s deep interior features, these are the most fascinating and complex. We have now got the first solid evidence to show their internal structure – it is a real milestone in deep Earth seismology,” said Zhi Li, lead author and PhD student at Cambridge’s Department of Earth Sciences.

The Earth’s interior layers are structured like an onion: at the centre sits the iron-nickel core, surrounded by a thick layer known as the mantle, and on top of that a thin outer shell, which is the crust we live on. Although the mantle is solid rock, it is hot enough to flow extremely slowly. These internal convection currents feed heat to the surface, driving the movement of tectonic plates and fuelling volcanic eruptions.

Scientists use seismic waves from earthquakes, which makes achieving an observation of the Earth’s interior layers possible— the echoes and shadows of these waves reveal radar-like images of deep interior topography. However, images of the structures at the core-mantle boundary – an area of key interest for studying our planet’s internal heat flow –  have been grainy and difficult to interpret, until now.

Scientists utilised the latest numerical modelling methods to reveal kilometre-scale structures at the core-mantle boundary of the Earth’s interior layers and to improve the resolution of the images by an order of magnitude compared to previous work.

“We are really pushing the limits of modern high-performance computing for elastodynamic simulations, taking advantage of wave symmetries unnoticed or unused before,” explained Dr Kuangdai Leng, co-author and currently based at the Science and Technology Facilities Council.

What did scientists observe from the Earth’s mantle?

Researchers observed a 40% reduction in the speed of seismic waves travelling at the base of the ultra-low velocity zone beneath Hawaii. This supports existing proposals that the zone contains much more iron than the surrounding rocks, which means that it is denser and more lethargic.

“It is possible that this iron-rich material is a remnant of ancient rocks from Earth’s early history or even that iron might be leaking from the core by an unknown means,” said Dr Sanne Cottaar, project lead from Cambridge Earth Sciences.

Scientists have noted that this could help researchers understand what sits beneath the Earth’s interior layers and give rise to volcanic chains like the Hawaiian Islands. A correlation was detected between the location of the hotspot volcanoes, which include Hawaii and Iceland, and the ultra-low velocity zones at the base of the mantle. The origin of these volcanoes has been discussed, but the most popular hypothesis indicates that plume-like structures bring hot mantle material all the way from the core-mantle boundary to the surface.

The images of the ultra-low velocity zone beneath Hawaii also allows scientists to gather rare physical evidence from what is likely the root of the plume feeding Hawaii; their observation of dense, iron-rich rock beneath Hawaii would support surface observations.

“Basalts erupting from Hawaii have anomalous isotope signatures which could either point to either an early-Earth origin or core leaking, it means some of this dense material piled up at the base must be dragged to the surface,” noted Cottaar.

What are the next steps for the research team?

Scientific observations add to a growing body of evidence that Earth’s deep interior is just as variable as its surface. “These low-velocity zones are one of the most intricate features we see at extreme depths – if we expand our search, we are likely to see ever-increasing levels of complexity, both structural and chemical, at the core-mantle boundary,” concluded Li.

They now intend to apply their techniques to enhance the resolution of the images captured of other pockets at the core-mantle boundary of the Earth’s interior layers, as well as mapping new zones. Eventually, they anticipate they will map the geological landscape across the core-mantle boundary and understand its relationship with the dynamics and evolutionary history of our planet.