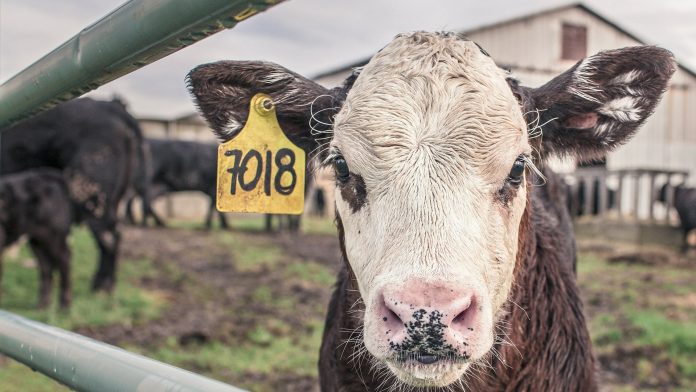 Following the 2001 foot-and-mouth disease (FMD) outbreak in the UK, a series of reports were written by government commissions and learned societies on the outbreak and how to improve disease control in the future.1 Many questions were examined, including:

When the virus causing the UK outbreak was isolated from animals and the genome sequenced, it could be compared for similarities with the genomes of other FMD virus strains from around the world. These analyses showed that the foot-and-mouth disease virus strain that caused the UK outbreak was the ‘O-PanAsia’ strain that had first appeared in India in 1990, when it spread across the Middle East towards Europe – reaching Greece in 1996.

Concurrently, the PanAsia virus was also transmitted throughout Asia, causing several outbreaks in 1999 and 2000 in the Far East. However, this strain then ‘jumped’ to South Africa (2000) and the UK. The most closely related virus to the UK and South African strains was from an outbreak in Japan (2000). So, in answer to the first question: where did the virus come from? – it is highly probable that the UK and South African outbreaks were caused by two independent transmission events of a virus from the Far East transported via international travel.

In the case of the UK’s 2001 outbreak, foot-and-mouth disease was first diagnosed in an abattoir in Essex, but the infected animals had originated from Burnside Farm, a pig farm close to Newcastle. In answer to the second question, therefore, most probably the virus came into the UK in the form of catering waste, containing illegally imported meat contaminated with the virus, followed by (untreated) waste food being fed to pigs on Burnside Farm as pig swill. The UK and South African cases vividly demonstrate the need for restrictions on the international trade in animals and animal products from countries where an FMD virus is present; no restrictions are placed upon such exports from countries which are FMDV-free (without vaccination).

The FMDV PanAsia strain showed an unusual capacity to infect sheep, although the clinical signs of disease in sheep are mild and difficult to diagnose. It is thought that the disease went undetected for some time at Burnside Farm, but had meanwhile been transmitted, via an aerosol plume, from Burnside Farm to nearby Prestwick Hall Farm, where cattle and sheep were infected. The disease had, therefore, been circulating for some time in north east England before the diagnosis of the foot-and-mouth disease virus in the Essex abattoir. In answer to the third question, therefore, the delay in diagnosis of FMDV in pigs led to numerous infections within sheep which went undiagnosed for weeks, combined with a large number of sheep movements between animal markets. Rapid diagnosis and imposition of animal movement bans are key factors in restricting the scope of an outbreak.

An EU approach to control of foot-and-mouth disease

The EU policy of FMD disease control is one of mass slaughter – euphemistically termed ‘de-population’ – of infected animals and surrounding susceptible animals, also known as ‘dangerous contacts’. Animals are culled humanely and the carcasses either incinerated, rendered or disposed of within licensed, commercial landfill sites. It should be noted, however, that included within the ‘dangerous contacts’ category are a number of wild animal species such as deer, which are also susceptible to FMDV and must be culled. In the 2001 UK outbreak, for example, some 6,134,078 animals (cattle, sheep, pigs, goats and deer, amongst others) were slaughtered. In this manner, the disease is eliminated from both domestic and wild animals; this enables a country to achieve the status of an ‘FMD-free country where vaccination is not practiced’ with no trade restrictions.

The scale of the foot-and-mouth disease virus

FMDV infects, however, a wide range (>70) of wildlife species throughout Africa, the Indian sub-continent, and Asia. Often, FMD infections in wildlife species are unapparent and cause persistent infections; such animals act as reservoirs of virus which can be transmitted to domesticated animals. This poses a strategic problem for FMD control in many developing countries. Present FMDV vaccines are made by the bulk growth of a virulent virus which is then chemically inactivated – a killed vaccine.

Naturally, there are attendant risks associated with virus leaks from high-containment facilities for vaccine production and research purposes – illustrated by the UK FMDV outbreak in 2007.2 Such killed vaccines are inert – they do not grow in the vaccine and, therefore, must be administered by injection. In the case of the killed FMDV vaccine, these are administered at approximately six-month intervals to provide and maintain protective immunity. So, while domesticated animals can be vaccinated in this manner, how does one vaccinate wild animals using this type of vaccine? It is practically impossible.

Disease control in countries where FMDV is endemic is effectively locked into a strategy of continually vaccinating domestic animals in the midst of wild animals that may harbour the virus and transmit the infection, dependent on affordability. When animals are vaccinated, the whole purpose is to generate an immune (antibody) response to protect the animal from infection. Whilst technically possible, it is not practically feasible to determine if these antibodies arose from vaccination or infection. In this situation, countries adopting this disease control policy are deemed by the World Organisation for Animal Health as an ‘FMD-free country where vaccination is practised’. That is to say, in this situation, that it cannot be guaranteed that vaccinated animals and animal products, derived from vaccinated animals, are free of contamination, hence the imposition of restrictions in the export of animals and animal products from these countries.

On the one hand, developed areas such as the USA and EU, which have the economic wherewithal to maintain a comprehensive veterinary infrastructure, possess:

On the other hand, in the case of many developing countries, virtually exactly the opposite applies:

Disease control based upon the use of killed vaccines – which must be administered by injection – essentially restricts control of FMDV to domestic animals, whilst vaccination of wild animals – forming an ever-present threat of infecting domestic animals – is not feasible. So, killed vaccines most certainly have a role to play, but they are not the strategic solution to the problem.

Whilst many readers may be familiar with the global eradication of Smallpox, fewer may know that the animal virus Rinderpest was also eradicated. In both cases, live, attenuated vaccines were used. In the case of Rinderpest, this involved eradication of the disease in both domesticated and wildlife animal reservoirs of disease. The huge success of the live, attenuated Poliovirus vaccines developed by Albert Sabin in the 1950s inspired new experiments to develop such vaccines for animals. This classical approach of attenuation by serial passage in tissue-cultured cells was so successful for Poliovirus that is was adopted for Rinderpest. This process produced an attenuated virus that did not cause disease but did confer protective immunity – the Plowright vaccine. This live, attenuated vaccine induced lifelong immunity and was inexpensive to produce, although did require a cold chain for distribution. At a later point, a thermostable version of the Plowright vaccine was developed (1990s) and used extensively for the eventual global eradication of Rinderpest.

Like FMDV, Rinderpest may be transmitted animal-to-animal via aerosols or direct contacts, but was primarily transmitted via contaminated water and food. Little information is available concerning transmission of the Rinderpest attenuated, live vaccine strain from vaccinated to non-vaccinated companion animals, or to wildlife species. However, the Plowright vaccine did eradicate the virus in both types of animals.

Could the approach used for the eradication of Rinderpest be used to eradicate FMDV? Could we develop live, attenuated FMDV vaccines? The situation is more complex in that FMDV comprises seven, immunologically distinct serotypes: A, O, C, Asia1, SAT1, SAT2 and SAT3, although type C has not been isolated in the wild for over a decade. Each of these serotypes comprise numerous subtypes. Although subtypes within a serotype are immunologically cross-reactive to some degree, infection by one subtype may provide partial or essentially no protection against infection by another subtype. This level of antigenic variation means that controlling the disease by vaccination is more problematic than was the case for Rinderpest (or, currently, Poliovirus), since multiple FMDV serotypes exist and variation within a serotype can render available vaccines ineffective.

However, relatively recent advances in molecular biological techniques, in combination with synthetic biology (the ability to chemically synthesise thousands of bases in a single gene block), allow us to create attenuated FMDV strains rapidly, in response to circulating wild-type strains. A sequence match can be achieved between the attenuated vaccine and the target serotype and strain so that the vaccine will confer protective immunity.

FMDV: a risk to food security

The South African and UK FMDV outbreaks show that the virus is capable of intercontinental jumps and, therefore, that food security, specifically with regard to animal viruses , is an international problem. The presence of FMDV in developing countries is a drag-sail on their agro-economies and presents an ongoing risk of virus transmission to countries many thousands of miles away. I argue here that the killed vaccines, plus the development of other types of vaccine such as FMDV epitope-based fusion proteins and the production of non-infectious virus-like particles offers immediate, powerful tools for FMDV disease control, but that the ultimate solution is the development of live, attenuated FMDV vaccines. Global eradication must be our goal.