Waste recycling infrastructure: how to create a circular economy 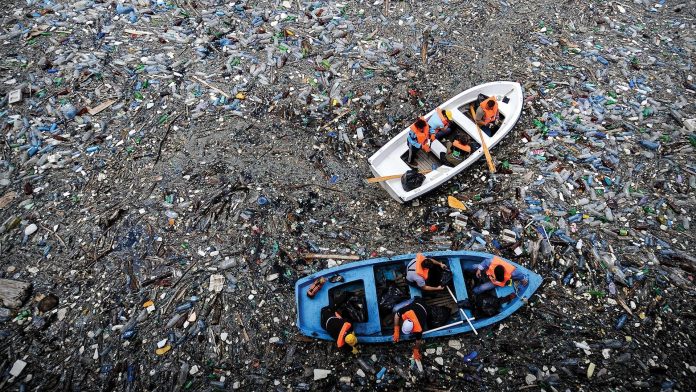 TOMRA Collection Solutions shows how a circular economy can be accomplished through adapting existing waste recycling infrastructure, viewing plastic as a valuable resource instead of waste.

There has been a seismic shift in public attitudes to waste and recycling recently and policymakers have been implementing ambitious targets and new regulation all over the world. The EU is no exception, having announced a series of new laws that will undoubtedly change the waste recycling infrastructure of EU Member States.

At the root of this new legislation is the circular economy and the EU’s desire to manage its own waste recycling infrastructure more effectively, further fuelled by restrictions put in place by countries that traditionally accepted the EU’s waste.

The EU currently recycles only about a quarter of the 25-26 million tonnes of plastic waste it produces annually, about half of which was sent to China. However, when China’s National Sword policy was introduced in February 2018, 24 types of waste material were banned and the purity level of accepted items greatly increased.

The world’s reliance on China as a depot for pre-sorted but dirty waste has been thrown into sharp focus, and with an influx of materials being diverted from China, other waste importing countries are following suit with restrictions. In August, Thailand banned the imports of plastic and electronic waste. Then, in October, Malaysia’s hugely strained recycling industry – which was inundated with 88,000 tonnes of the UK’s plastic scrap and 150,000 tonnes from the US – announced similar restrictions on plastics imports.

As countries close their borders to poor quality recyclables, Europe’s waste exporting countries are planning how they are going to manage the tidal wave of rubbish they traditionally exported and are looking inwards to improve their own waste recycling infrastructure.

Through the Circular Economy Package, EU Member States have signed up to a number of legislative proposals on waste, including a 75% target recycling rate on packaging waste by 2030. Additionally, in October, the European Commission announced that not only would plastic drinking bottles have to include a minimum of 35% recycled content by 2025, but also that Member States must collect and recycle 90% of these beverage containers.

In addition to China’s waste import ban, the catalyst for this legislation has been heightened awareness of an increasing environmental pollution crisis. Implementing these ambitious targets to streamline the waste recycling infrastructure will bring many benefits and by managing resources more efficiently, EU countries will create green jobs, manufacture higher quality products and deliver a more sustainable and circular model of production.

While many governments are realising that our industrial model is no longer sustainable and are increasingly willing to take action, a circular economy can seem like an intangible or distant goal.

But a circular economy would have wide-ranging benefits and can be introduced very practically, says TOMRA’s circular economy advisor, Kristine M. Berg: “The circular economy is all about the positive environmental impacts of keeping resources in closed loops. This includes the direct benefits of the waste recycling infrastructure such as reducing carbon emissions, but I would argue that it also covers much wider benefits of reducing demand for virgin materials and triggering improvements in consumer behaviour.”

Berg also highlights important distinctions in how climate and environment are understood with a circular economy perspective, both by government and consumers: “Circular economy mindset is a key solution when talking about environmental issues such as marine litter, because in a sense you eliminate the idea of ‘waste’. Everything is a resource. Materials are ideally designed for recycling, for a second, third, fourth lifecycle – and are collected and recycled accordingly to maintain material quality. This is true for glass bottles, metal cans and plastic bottles, for example.

“But not all of these perform equally well if we talk about climate on top of this. Plenty of other materials can be recycled to a high quality over and over again – but collection and recycling can be very energy intensive. Although much harm can come from plastic materials when they go astray and end up in the environment, plastic outperforms most other materials in terms of climate gains or benefits in the waste recycling infrastructure. Furthermore, plastic can’t be easily replaced in terms of medical equipment, transport, or food and water safety. Plastic isn’t the enemy, our single-use behaviour is.

“Waste management systems are extremely complex and value chains can be very intricate. Co-operation and transparency are key; when thinking about the execution of EU-wide regulation there needs to be thoughtful implementation.”

With increasing awareness over the impact plastic has on the environment, regulators have an important role to play in maintaining the reputation of the material. Plastic is the workhorse material of today’s economy and, for manufacturers, it brings unrivalled functionality at low cost.

However, there are signs that European legislators are considering reclassifying plastic as ‘hazardous waste’, following a proposal discussed at the Basel Convention in September. While the intentions behind the recommendation may be good, TOMRA suggests that restrictive policies would make the waste recycling infrastructure and thus recycled products more expensive and complicated.

Head of TOMRA Collection Solutions, Harald Henriksen, says: “With advanced sensor-based sorting technology available, there is no need to burn plastic waste for energy recovery instead of recycling it into new products. In fact, this is the very definition of a linear economy, and what legislators are trying to overcome.

“Taking a waste-to-energy approach doesn’t encourage better product design and consumer behaviour. Worst of all, burning plastic means that we need to pump up more oil for more products, when we have already produced 8.3 billion tonnes of plastic since the 1950s.”

For Henriksen, the EU’s focus for a circular economy should be on reducing demand for, and reliance on, virgin plastic.

From waste to value

Central to the vision of a circular economy shared by policymakers, industry and technology providers like TOMRA, is the reimagining of plastic as a valuable resource within the waste recycling infrastructure.

Henriksen continues: “We need to stop viewing plastic as waste, and instead treat it as a resource – and an opportunity. The linear economy model of ‘take, make, dispose’ has been accelerating for the past 40 years. At its heart is a culture of waste, viewing products as disposable, with little regard for what becomes of them once discarded. In a circular economy it is possible to collect and recycle without impacting on the product’s quality, so that products can be used again and again in a never-ending closed loop.”

Henriksen suggests that rather than demonising plastic as a pollutant, the EU has adopted the right focus in setting circular economy targets, such as limiting the use of virgin plastic and incentivising improvements in waste recycling infrastructure.

“These are very positive steps and the momentum is all heading towards a more circular economy,” Henriksen continues, “but the important question is, who is ready?”

While overall the EU managed to recycle 67% of packaging in 2016, that was led by strong performers such as Belgium and Denmark, who recycle around 80%. The reality is that Hungary, Croatia, Estonia and Latvia struggle to recycle 50% of their packaging, according to Eurostat data.

Introducing a deposit return scheme (DRS) is the most effective way for EU Member States to meet new waste recycling infrastructure targets, for example achieving a 90% collection rate on single-use plastic drinks bottles ahead of the 2025 deadline, according to TOMRA.

These see consumers pay a deposit of up to €0.25 on plastic, aluminium and glass containers, which is then refunded when the bottle or can is returned for recycling. Eight EU nations now have a deposit return system (DRS), with Germany leading the way at a 98% return rate. TOMRA’s innovative ‘reverse vending’ machines – which enable automated collection – are also used in Lithuania, where a DRS implemented in 2016 saw recycling rates soar from 34% up to 92% within two years.

DRS schemes achieve up to 40% higher collection rates for plastic, aluminium and glass beverage containers than other methods incorporated in the waste recycling infrastructure and there are two main reasons for this:

Financial incentive – providing consumers with a financial incentive not only motivates them to dispose of their container in the correct place, it also communicates that the container has a value, that it is not rubbish and should be treated as a resource. In fact, deposits reduce beverage litter by up to 80%.

Increased purity – by separating bottles and cans for recycling through reverse vending machines – drink containers are collected without contamination from other types of waste in a household recycling bin and can maintain a high level of quality, suitable for turning back into a bottle, rather than being downcycled for lower quality applications.

This is a process known as closed-loop recycling, which TOMRA calls the Clean Loop. This reduces both reliance on the raw materials needed to produce new beverage containers (that is, coming into the loop) and waste ending up in landfills or in nature as litter (going out of the loop).

Furthermore, a DRS works exceptionally well when policymakers and manufacturers work together to ensure that products are designed with waste recycling infrastructure in mind. Around 80% of a product’s environmental impact is determined at the design stage, so manufacturers should transform the way products are designed and produced, especially those made with mixed plastics that are extremely difficult or impossible to recycle.

EU Member States will have a challenge on their hands over the next couple of years to meet these new ambitious targets, however with good collaboration between manufacturers, policy makers and consumers the targets are very achievable.

A circular economy can be a result of this collaboration: having the right waste recycling infrastructure in place to not only achieve high collection rates, but also maintaining a high level of purity on the material collected, will ensure a bottle can be reincarnated again and again, keeping litter out of the world’s oceans, streets and landfills.