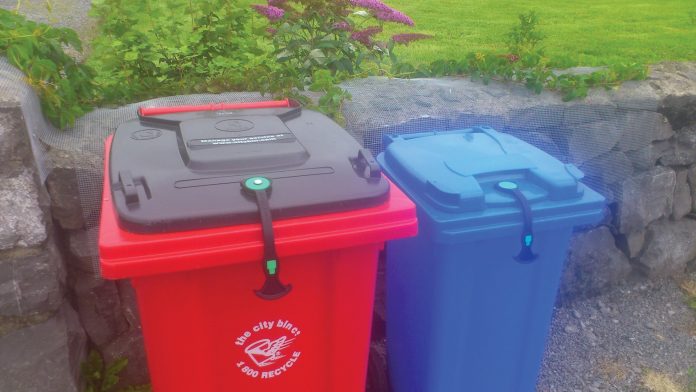 BinStrap’s Gaelan Goodfellow explains why the company’s cost-effective solution for wheelie bins can help to prevent waste entering both the marine and land environments.

You can’t go anywhere these days, either online or offline, without reading or hearing about the crisis our planet is facing. From global warming to ocean pollution, graphic images are being shared worldwide in a bid to educate and stir up a reaction to the epidemics we are facing.

We need to deprogramme the desensitisation that the masses have recently undergone via the media in order to impose on them just how very serious these issues are. Some people are waking up to how serious the consequences of our actions are, but not enough, and not half fast enough.

While a lot of this blame is (and rightly so in some cases) falling on businesses and corporations, we need to be aware that there are some businesses and corporations out there that are genuinely trying their best to tackle, and in some cases reverse, the issues causing the problems we are facing. These organisations need our support; they need to be held on a pedestal so that they are acknowledged and can inspire others to do their part, too. Not all businesses are in it for the profit; some want to make a real tangible change and some of the solutions are so very simple you’ll be kicking yourself that you didn’t think of them!

One of these businesses is BinStrap. A patented invention by Irish entrepreneur Gaelan Goodfellow, the BinStrap is paving the way for cleaner, greener neighbourhoods and streets by helping residents and businesses alike keep a lid on their rubbish. This is done with a strong strap that attaches to the lid of a wheelie bin and hooks under the lip to keep the lid closed.

To think of how simple this is and of how effective it could be, is just mind blowing.
To put things into perspective: there are over a billion wheelie bins in neighbourhoods, towns and cities across the world, some are coastal towns, some are tourist hot spots, some scenic routes. What happens when there’s a gust of wind and a few bins get blown over? Rubbish spills out – this rubbish enters our waterways, litters our towns and countrysides causing pollution, making our areas look dirty and damaging our wildlife. And that’s just in one of the towns/ cities. Imagine that occurring in every town/ city across the globe! Have you any idea how much rubbish that is? Do you care? Do you think the impact of all that rubbish is okay, and that turning a blind eye to it is the right thing to do when there is such a simple, cheap and impactful solution?

No? Then read on.

There are over a billion wheelie bins worldwide, and yet not one is supplied with a lid restraint. Every time we put our waste out, and every time we place our bins outdoors, its entire contents are vulnerable to the weather, animals, and other people.

Wheelie bins were designed to replace the practice of leaving flimsy refuse sacks on the footpath for refuse collection, as well as to have somewhere safe to put the refuse for the days/ weeks in between collection. However, when these wheelie bins were designed over a decade ago, no one thought about their poor design and how easy it is for others to put their rubbish into other people’s bins, how easy the bins are to knock over, how easy it is for the bin lid to blow open, or how easy it is for animals to get into the bins. All of these things create problems like fly-tipping; pollution; poisoning/choking hazards for animals and birds, as well as a plethora of other problems like the spreading of germs and disease and hazardous practices like using heavy blocks or dangerous bungees to secure the bins. To date, wheelie bin manufacturers are still not doing anything to address the problem and only a handful of waste companies or councils are acknowledging the need to secure wheelie bins.

No one enjoys chasing rubbish down the street or having the eyesore of household waste getting caught in bushes, in our waterways, or stuck to unfortunate animals.
Every year eight million tonnes of plastic enter our ocean, BinStrap is committed to dramatically reducing this number, simply by securing wheelie bin lids. BinStrap is a patented device that was designed with the intention of securing the 1.5 billion unsecured wheelie bins worldwide that are spilling plastic and rubbish into our environment, rivers, and oceans. These bins get knocked over, blown over, overfilled, and rummaged through by animals, birds, rodents, and wildlife, and this causes a huge mess and is massively polluting our planet.

Wheelie bin owners also have to face cleaning up spilt litter and rubbish that has often been in the bin for over two weeks, and run the risk of receiving a litter fine even if they are not at fault, i.e. the bin has been blown over during the night or animals have got into the bin causing a mess.

BinStrap also solves other problems such as reducing rodent infestations by keeping them out of the bin, rodents are attracted to wheelie bins because of the odour coming from easy access food inside. Keeping animals, birds, and wildlife out of the bin also protects them from ingesting plastic that they think is food.

Securing bins globally will greatly reduce litter and plastic pollution, protect our oceans and create a cleaner greener planet. Creating a plastic-free ocean and litter-free planet requires us turning off the tap on plastic pollution entering our environment, rivers, and oceans.

Every year, 8-13 million tonnes of plastic and rubbish leak into our oceans, and the majority of this pollution comes from unsecured wheelie bins. All of this toxic plastic that is in our oceans is being eaten by fish – the plastic cannot be digested and ends up stuck in the animals gut and leaks into their flesh. We in turn eat the tainted fish, so the plastic is getting into our food chain.

The negative effects caused to humans is not yet known but we do know that it can cause brain damage in fish, so can you even imagine what it’s doing to us?

In the UK, over a million sea birds die from ingesting plastic that they think is food, it is also eaten by animals, mammals, and other wildlife causing illness and death. Even the ocean life and land animals that don’t eat the plastic are affected as they get wrapped up, caught in, and strangled by all different types of plastic waste that are not properly disposed of, or are not properly secured.

The menace of unsecured wheelie bins

Unsecured wheelie bins provide an abundance of easy access food for animals, birds, rodents, and wildlife. The odours emitted by partially open compost/food waste wheelie bins attract these animals, and in many cities this leads to rodent and rat infestations causing the spread of germs and disease. Once a rat infestation has occurred, it is difficult to get rid of the rodents, as they multiply and make a new home for themselves.
Litter pollution in cities has significant negative impacts on tourism and business, as well as a negative social impact on the cities inhabitants who witness this scourge on their doorstep every day. People who live in areas that are consistently untidy eventually get used to the eyesores and it becomes the norm for them and their area. This type of problem is hard to reverse as morale is destroyed and people stop taking responsibility for the area, often passing it off as someone else’s problem.

Tourism will suffer because when tourists come to visit a city, they expect it to be clean and welcoming, this is not the case in some cities around the world where tourists visit and are appalled by the amount of rubbish they see on streets. These tourist will not come back, and in areas where tourism is the biggest income stream, this is simply not going to do.
Unsecured wheelie bins are spilling plastic and rubbish into our surroundings.
Businesses suffer from untidy, dirty areas, both indoors and out, nothing turns customers away faster than the sight of flies, bugs, and rodents that are attracted to the odour coming from a large number of wheelie bins that are left unsecured and overfilled on their premises.

There was recently a post on social media of a rodent inside a deli counter nibbling on the pre-packed food, whilst the video was regarded by some as ‘cute’ (with regards to the little mouse), it is most definitely not ‘cute’ to be sharing lunch with a rodent! This video no doubt closed the premises by Food Health and Safety authorities and cost the business a huge amount of money. The visit by the mouse was most likely due to improperly presented food waste and the odour of such which lured the mouse into the establishment.

Things are getting worse

Now that our cities are growing in population, the amount of litter pollution is rapidly increasing, so these problems are getting far worse. It’s time to put a stop to wheelie bin pollution before it becomes uncontrollable. People have been attacked by seagulls looking for food inland due to the amount of accessible waste that is luring them in. Governments are under a huge financial burden when it comes to litter with recorded spending of over £1bn (~€1.16bn) every year in the UK cleaning up litter! Why keep throwing money at a reactive ‘solution’ that isn’t working when there is a fantastic pro-active solution that would cost less to implement and cut the subsequent years costs to a fraction of the current spend.

Plastic is one of the worst threats to our planet at this time, it is seeping into our environment and in the end everyone on the planet will suffer.