John Howes, Principal at Redland Energy Group and Consultant to Battery Council International details the latest research in advanced lead batteries for stationary applications and their potential to meet the $35/kWh goal.

While lithium-ion has become the most publicised battery technology used in the emerging electric grid storage market, will that dominance continue in the coming years? The US Department of Energy (DOE) is suggesting other battery technologies could be attractive alternatives.

One of those alternative technologies is the historical workhorse lead battery, which is undergoing a comprehensive makeover in a partnership between the industry and national laboratories. A new generation of advanced lead batteries emerging from this makeover is coming at a critical time as the DOE’s Office of Electricity (OE) looks for cost-effective storage technologies to help integrate wind and solar into the electric grid.

DOE and others in the energy storage research community say that if power from intermittent renewable sources like wind and solar is to replace fossil fuels as a primary generation resource, then batteries and other storage technologies will be needed. The cost of batteries will have to fall below $35/kWh if they are to help renewables become economically competitive with natural gas-fired plants. The DOE says lithium-ion battery costs are unlikely to fall below $100/kWh, while lead batteries have the potential to reach that target range. 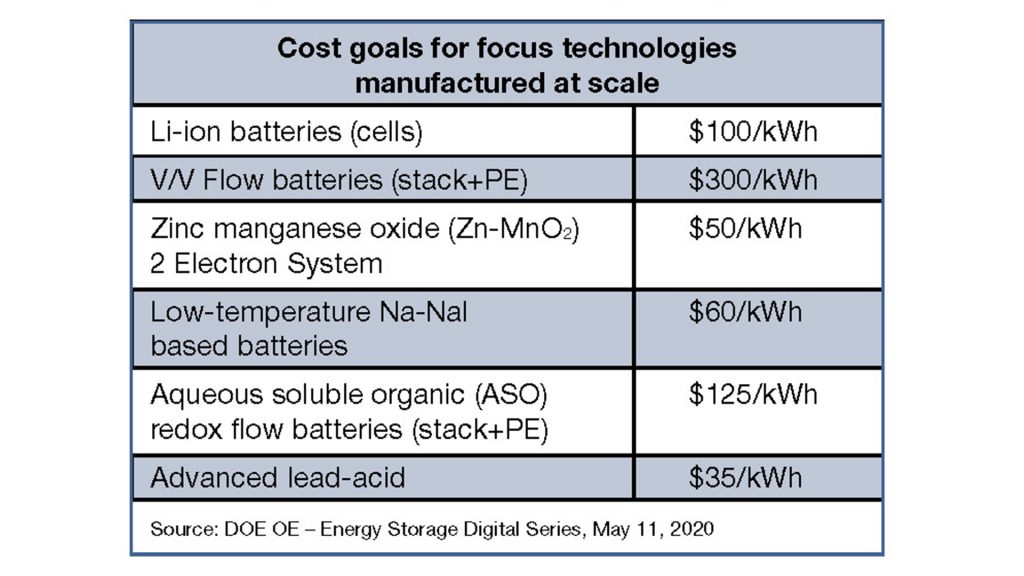 The Federal Consortium for Advanced Batteries (FCAB), in a June 2021 report, said that while lithium-ion is likely to remain the battery of choice for the growing electric vehicle industry, it recognises a different situation for stationary applications:

“With greater duration requirements and less stringent density and weight constraints, non-lithium storage technologies may emerge as the most cost-effective long-term solutions for stationary storage.”

Funding for batteries and energy storage

This increase in grid storage research comes as the US Energy Information Administration (EIA) estimates the country’s electric grid system will need to deploy at least 55 gigawatts of batteries by 2050. That would far exceed the current deployment by a factor of five.

There are divided opinions on whether lithium-ion will continue to be the battery of choice for grid storage applications. Even some who predict lithium-ion will remain dominant acknowledge that other battery technologies may emerge as attractive alternatives.

Bloomberg New Energy Finance (BNEF) said in POWER Magazine on Nov 15, 2021: “We expect lithium-ion batteries to dominate the market at least until 2030 given their cost competitiveness and established supply chain.”

But BNEF, in the same article, said it sees “new storage technologies and battery materials that are emerging and can potentially play a meaningful role over the long-term.” It is important to note that renewable energy technologies and lithium-ion batteries are highly reliant on elements not abundant in the US and sourced from strategically sensitive regions.

Regardless of which battery technologies emerge, the DOE OE says there is an urgency to carry on research and development on a portfolio of technologies. With many in the electric power industry pledging to achieve a ‘net-zero’ carbon emissions profile by 2050, the OE has devised a road map of how batteries can help accomplish that goal. The DOE has illustrated this need in its ‘Rapid Operational Validation Initiative’ (see Fig.1), part of its Energy Storage Shot programme introduced in 2021.

The DOE explains the initiative this way: Many utilities generally acknowledge they must achieve net zero carbon emissions by 2050. Since a typical power purchase agreement between utilities and third-party suppliers usually runs between 15 to 20 years, innovations must be proven (permits and commercial track records) no later than 2035. Since permitting generally takes five years to complete, innovations will have to be ready for commercialisation no later than 2030. It is that eight-year period from 2022 to 2030 that will be crucial for any energy storage technology to succeed in stationary storage applications.

The case for advanced lead batteries

There are several reasons why lead batteries attract more attention within the DOE and the national laboratory system:

This has led one DOE official to say in an article published in Physics Today in September 2021: “You could take advantage of a well-developed fully closed recycling-life-cycle (lead battery) supply chain in the US to get more performance out of an existing technology.”

The challenge facing the North American lead battery industry is how to approach the $35/kWh cost goal (from its current $100/kWh) level.

One of the goals of the LBSRP is to extend the cycling life or full operational lifetime of lead batteries by researching ways to better manage the growth and dissolution of lead sulphate crystals. These crystals are the natural result of the electrochemical reactions within the battery, yet they limit the battery’s operational life as they expand and accumulate. This process blocks the flow of ions needed to keep the battery cycling.

Through the past three years, Argonne scientists working with LBSRP member companies have learned that the interaction of internal battery temperature and certain additives directly affects the size and shape of crystals. The larger the crystals, the lower the ability of the battery to recharge. Conversely, the smaller the crystals, the easier it is for them to dissolve and maintain the battery’s cycling ability. Higher internal battery temperature also improves charge acceptance, but that temperature must be kept within a specific range to avoid excessive gas buildup and water loss. Scientists are also learning more about how crystal particle size and charge acceptance are affected by additives like carbon, barium sulphate, and lignosulfonate.

While these reactions have been known to scientists for many years, the Argonne scientists have been able to use state-of-the-art equipment to see the reactions in real-time rather than through a traditional trial-and-error (empirical) process. Perhaps ironically, much of the equipment (like Argonne’s Advanced Photon Source) has been used for years on lithium-ion technology. The fact that lead battery research has been added to the Argonne programme is now enabling the DOE to establish a broader array of technological options that can help the electric power industry gain access to economically viable batteries as they incorporate variable power to their grids.

The collaboration between the industry and national laboratories has already yielded impressive results. SUPERSOFT-HYCYLCE™ was developed by Ecobat and has been tested at Pacific Northwest National Labs to show battery cycling performance and at Argonne National Lab to provVisit Site

ide a fundamental understanding of how the alloy is improving cycle life.

Results show a dramatic increase in cycling (as seen opposite). The tests show that the cycling of baseline control batteries (red and blue lines) with standard lead alloys falls precipitously. In contrast, batteries with the Supersoft-Hycycle alloys (green and black) retain cycling capability. The baseline control batteries require overcharging to maintain cycling, while the Supersoft-Hycycle batteries do not. Overcharging increases the risk of gassing and water loss in batteries and compromises battery lifetime.

While the results of the tests on the new Ecobat alloy are impressive, much more can be done. Another programme launched by several LBSRP member companies, Argonne and the University of Toledo, is conducting a comprehensive review of lignosulfonates, organic materials (mostly made from wood fibre) used for many years to help the flow (discharge) of power from the battery. Lignosulfonates work well in helping the discharge of power, but they inhibit – and thereby lengthen – the time needed for the battery to recharge. Improving this charge/recharge cycling is vital in helping lead batteries become more responsive to changing requirements in both transportation and stationary applications. Scientists at Argonne and Toledo are looking more closely into the molecular structure of lignosulfonates to understand better why recharge is inhibited. They also are looking at other materials to determine whether there can be viable alternatives.

While this work is still in its early stages, some promising results are beginning to emerge.

The first chart (Fig. 3) illustrates how commonly used lignosulfonates help the flow (discharge) of power from the battery but perform inefficiently as the battery recharges.

Further testing is required to balance the discharge and recharge so that the battery can cycle more efficiently, thereby extending battery life.

While the materials science research at Argonne, PNNL and other US institutions is vital to the future of the lead battery industry, new designs and improved manufacturing processes are emerging as well.

Designing the structure of the batteries is changing. Throughout the past 150 years, lead batteries have used two monopolar (positive and negative) plates to conduct the flow of ions within the electrolyte that produces the power flowing from the battery. A new design conceived in the early 20th century is now emerging in the commercial market, a single (bi-polar) plate with negative and positive elements on either side. This dramatically reduces the amount of lead and increases the battery’s efficiency, thereby reducing its weight and cost.

Beyond battery materials and design, the industry and national laboratory scientists are beginning to consider new approaches to manufacturing lead batteries that could potentially reduce by half the time required for battery production.

For more than one hundred years, lead batteries have been manufactured with a highly energy-intensive and time-consuming process that, by some estimates, accounts for half the current average cost of $100/kWh. A lead oxide paste is applied to the grids, and then the wet plates are processed in a curing operation that can take several days, after which they are ready to be placed into battery cases with the electrolyte.

Advances in material science underway in the collaborative research between the US lead battery industry and national laboratories would be combined with a modernised manufacturing system. The goal is a new generation of advanced lead batteries that could be a powerful competitor to lithium-ion if they maintain their low life-cycle cost profile while achieving greater levels of energy throughput to meet changing consumer needs.

Knowing more about how batteries recharge will guide how batteries can be manufactured more efficiently and economically. The result could help the US lead battery industry better position itself to compete with cheap imports of other energy storage technologies. It also would allow the industry to move closer to the $35/kWh cost goal envisioned by the US Department of Energy.