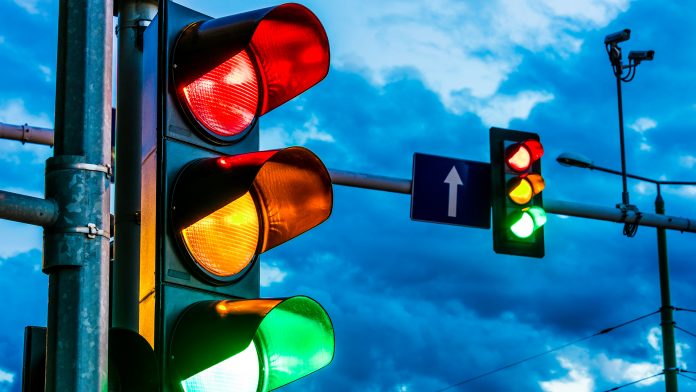 At the Fraunhofer Institute for Optronics, System Technologies and Image Exploitation IOSB, researchers in the institute branch for industrial automation INA, in Lemgo, are using Artificial Intelligence (AI) to enable smart traffic light control as part of the ‘KI4LSA’ and ‘KI4PED’ projects to reduce traffic jams. In the future, self-learning algorithms combined with new sensors should ensure better traffic flow and shorter waiting times, while providing improved safety for pedestrians at crossings.

The project partners are Stührenberg GmbH, Cichon Automatisierungstechnik GmbH, Stadtwerke Lemgo GmbH, the city of Lemgo (associated) and Straßen NRW (associated). The German Federal Ministry of Transport and Digital Infrastructure (BMVI) is funding the project, which ends in summer 2022.

Conventional traffic lights utilise rule-based controls, but this rigid approach does not work for all traffic situations. In addition, the sensors currently in use — induction loop technology embedded in the road surface — provide only a rough impression of the actual traffic situation. The researchers at Fraunhofer IOSB-INA are working to address these problems.

Instead of conventional sensors, they are employing high-resolution cameras and radar sensors to more precisely capture the actual traffic situation. This allows the number of vehicles waiting at a junction to be determined accurately in real time.

The technology also detects the average speed of the cars and the waiting times at any current moment. The real-time sensors are combined with AI, which replaces the usual rigid control rules. The AI uses deep reinforcement learning (DRL) algorithms, a method of machine learning that focuses on finding intelligent solutions to complex control problems.

“We used a junction in Lemgo, where our testing is carried out, to build a realistic simulation and trained the AI on countless iterations within this model, explained Arthur Müller, project manager and scientist at the Fraunhofer IOSB-INA. “Prior to running the simulation, we added the traffic volume measured during rush hour into the model, enabling the AI to work with real data. This resulted in an agent trained using deep reinforcement learning: a neural network that represents the lights control.”

The algorithms trained in this way calculate the optimum switching behaviour for the traffic lights and the best phase sequence to shorten waiting times at the junction, reduce journey times and thus lower the noise and CO2 pollution caused by queuing traffic. A main advantage of the algorithms is that they can be tested, used and scaled up to include neighbouring lights that form a wider network.

Big impact when scaled up

The simulation phases carried out on the congested Lemgo junction, fitted with intelligent lights, demonstrated that the use of AI could improve traffic flow by 10% to 15%. Over the coming months, the trained agent will now take to the streets for further evaluation in a real-life laboratory. This testing will also consider the influence of the traffic metrics on parameters such as noise pollution and emissions.

However, the unavoidable ‘simulation to reality gap’ presents a challenge. “The assumptions about traffic behaviour that were used in the simulation are not a 1:1 representation of reality. So, the agent will need to be adjusted accordingly,” Müller explained. “If this is successful, the effects of scaling up will be huge. Just think of the large number of traffic lights even in a small town like Lemgo.”

The EU estimates that traffic jams cause economic damage totalling to $100bn per year for its member states. According to Müller, AI traffic lights provide an opportunity to use our existing infrastructure more efficiently. “We are the first team in the world to test deep reinforcement learning for traffic light control under real-world conditions. And we hope that our project will inspire others to similar endeavours,” added Müller.

The ‘KI4PED’ project focuses on pedestrians rather than vehicles. In a project scheduled to run until the end of July 2022, Fraunhofer IOSB-INA is working together with Stührenberg GmbH and associated partners Straßen NRW, in the city of Lemgo and the city of Bielefeld to develop an innovative approach for the needs-based control of pedestrian signals.

This is estimated to be particularly beneficial for vulnerable people, such as older people or those with disabilities. The aim is to reduce waiting times and improve safety at pedestrian crosswalks by enabling longer crossing times. According to current studies, the ‘walk’ times are too short for these groups of people. The buttons currently in use, generally in small yellow boxes, do not deliver any information about the number or age of crossers, or indeed their other needs.

The project partners want to use AI in combination with high-resolution LiDAR sensors to automate the process and automatically adjust and increment the crossing times according to the needs of the pedestrians. The AI performs person detection and tracking based on data from LiDAR sensors and applies it in an embedded system in real time.

“For data-protection purposes, we are using LiDAR sensors rather than camera-based systems,” explained Dr Dennis Sprute, project manager and scientist at Fraunhofer IOSB-INA. “These present the pedestrians as 3D point-clouds, meaning that they cannot be individually identified.”

LiDAR sensors (light detection and ranging) emit pulsed light waves into the surrounding environment, which bounce off nearby objects and return to the sensor. The sensor measures the time it takes for the light to return to calculate the distance it travelled to the object, in this case, the person.

These sensors are also resistant to the influences of light, reflections, and weather. A feasibility study will be carried out to determine the optimum positions and alignment at the crossing. The AI algorithms will initially be trained for a week at two stoplight crossings in Lemgo and Bielefeld. Sensors tests are also planned on the Fraunhofer IOSB-INA site using various simulated light conditions to determine the detection capabilities.

By using a needs-based control concept adapted to the individual situation, the research partners hope to reduce the waiting times when there are lots of people waiting by 30%. They also aim to reduce the number of incidents of jaywalking by around 25%.

Plant genomic selection models to be created by Artificial Intelligence

Scientists detail how Artificial Intelligence can be used to create models for genomic selection of sugarcane and forage grass varieties.
Read more