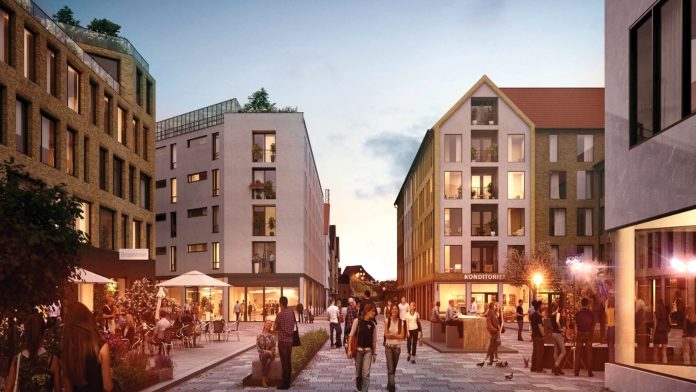 The City of Varberg explores how it intends to become a creative hotspot – encouraging entrepreneurship, community collaboration and the dedication to achieve.

Varberg is an attractive community on the south west coast of Sweden with a long history of growth. In fact, 2017 marked the year where the municipality experienced 60 years of continuous population growth, which is quite unique in Sweden. Only 14 municipalities in Sweden have achieved this.

In our vision for the future, the municipality has unique opportunities. The city of Varberg is one of the most attractive cities in Sweden, ideally located with the historic city centre next to the coastline and with a rich and diverse rural countryside. Our location is exceptional, Varberg is positioned between two of Sweden’s fastest growing regions – the Greater Gothenburg region and the Greater Copenhagen region.

Investing for the future

The Swedish government is investing heavily in the west coast railway to increase the capacity for commuting, and to connect cities and regions along the way. In Varberg, this means that the railway will be located in a tunnel under the city centre. To make the most of this, we will move parts of our harbour and have begun planning for a new waterfront area that connects the city centre with the coastline, as the industrial barriers are removed.

In the 1950s, the city of Varberg was ‘discovered’ by people in Sweden’s bigger and more industrial cities. This of course coincided with the greater availability of cars. Before that, the towns along the south west coast of Sweden were mostly dependent on fishing and farming, but suddenly the tourist sector exploded when city people needed a summer holiday on the coast. Varberg is one of the cities that has really flourished because of this development, whereas others flourished for a while and then slowly went into a quiet slumber.

A hub for entrepreneurship and diversity

The city of Varberg’s dissimilarity to other communities is obvious in so many ways. Due to a high level of entrepreneurship, there is a very diverse business sector in the municipality – from the large-scale industrial production of timber, pulp and energy, to countless hotels and restaurants that serve Varberg as one of Sweden’s most popular spa and coastal resorts – all year round. Varberg is, in many ways, a hidden gem, but more and more people are discovering the city as a place to settle down. With less than an hour by car or train to Sweden’s second largest city, Gothenburg, and the airport of Landvetter, Varberg is extremely well connected.

Varberg is really making the best of its fortuitous position. The building boom in Sweden is also apparent here and new residential areas are the result of wise planning for developing former industrial properties and using fill-in sites to make the city more interesting for everyday life. It is important for us that it is possible to lead a good life within the entire municipality, and not only in Varberg. Although most of the development for housing is focused on the city, we strive to involve those residents living in our more rural communities too.

Reinventing the community: building on creativity

We engage people in the decisions that have the greatest effect on their everyday life. Through dialogue and local action plans, we work together to see where public and commercial service, infrastructure and housing, can be used to their greatest potential. It is also a way for our citizens to meet with local politicians and decision makers, and share their thoughts about how the municipality can be made even more attractive. This is becoming ever more important as decision making is moving farther and farther away from the people.

Creativity, innovation, and a strong focus on the social and cultural aspects of sustainability, are at the very heart of ensuring that the Municipality of Varberg takes its position as the Swedish west coast’s creative hotspot.

A sustainable society needs to be based on the empowerment of people and the foundations of democracy; new forms of meetings are important for reinventing the community. In Varberg, we wish to involve people in the creative process. Our aim is clear, and we are acting on it. We are building a community, converging around the means of public transportation and sustainable lifestyles. Our momentum shows in the many awards we have been presented with.

A proven record of achievement

The Municipality of Varberg was appointed Sweden’s ‘Most Liveable’ in the category for smaller communities and has received the award for four consecutive years. Our thriving city centre was recently the winner in Sweden’s City Centre of the Year award. And living in the wonderful coastal province of Halland, it is certainly very fitting that Varberg’s yearly event, Hallifornia, was awarded Placebrander of the Year. We are proud of these awards and all the people that have worked so hard to make them possible; we regard these awards as being indicative of the future path for our city.