The Port of Esbjerg is well-positioned to lead Denmark’s hydrogen economy as part of Europe’s green energy transition.

The saying that ‘ability entails responsibility’ may be true for the individual but, when talking ports, it may be reworded as ‘a favourable location spurs responsibility’, as it is the location of ports in context to the logistics networks that they serve that depicts the possibility. For the green transition in Europe, a new era has begun with the hydrogen economy, and this was manifested with the Esbjerg Declaration.

From a port perspective, the network from production to consumer is important, and here the vast offshore wind developments in the North Sea, the Danish energy island, and the areas of South Denmark bring the Port of Esbjerg into a pole position. This is also manifested by the initiative of the European Hydrogen Backbone, which involves 31 European energy infrastructure operators who share the vision of a climate-neutral Europe.

The Port of Esbjerg is located close to the entry point of the future hydrogen pipelines from the North Sea to the European Hydrogen Backbone, and is therefore highly relevant for kickstarting the hydrogen economy from the 1-gigawatt electrolyser project being appraised adjacent to the port and the possibilities of the planned 10-gigawatt connection to the Danish energy island. 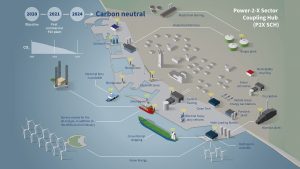 The transition to hydrogen

Conversely, it is the transition from natural gas to hydrogen that is the key that unlocks the large-scale hydrogen economy. Today, natural gas is transported via pipeline, but transport by ship will increase in the future. To transport natural gas by ship, it is refrigerated to be liquified at the exporting port and in the importing port regasification is performed before the gas enters the system of pipelines transporting it to every corner of continental Europe.

Thus, it is the need to transport by ship that allows the Port of Esbjerg to evaluate a liquified gas terminal that can be converted into a hydrogen terminal when the hydrogen projects mature in conformity to the installation of the offshore wind capacity and the establishment of energy islands in the North Sea. The optimum will be to use the existing gas infrastructure in Europe to transport hydrogen in the future, but until this situation matures, import terminals will be relevant.

A future import terminal for hydrogen in the Port of Esbjerg would allow transport from energy islands to shore and further transport into Europe earlier than the establishment of a grid of hydrogen pipelines in the North Sea depicts and therefore enhance the green transition and make a seamless connection to the wider hydrogen economy.

Similarly, the imminent need for a terminal in the Port of Esbjerg is driven by the requirement for natural gas in Europe, but this is expected to be replaced by hydrogen considering the mid- and long-term perspectives of the green transition in Europe.

Therefore, the terminal in the Port of Esbjerg would allow for connection to the European natural gas pipelines, which later may be converted for hydrogen, but would also provide the possibility for transport by train as well as ship-to-ship transports for further distribution. These are important elements when considering the continuation of the project.

Nevertheless, the requirement for hydrogen in Europe will eventually surpass the production capacity from renewable sources, wherefore import from Brazil, Chile, or Mexico is envisioned. This depicts the need for imports with specialised hydrogen vessels, exemplifies the longevity of the terminal in the Port of Esbjerg, and illustrates how this adds to the green transition in Europe.