Hydrogen fuel cell innovation: the time is right, are you ready? 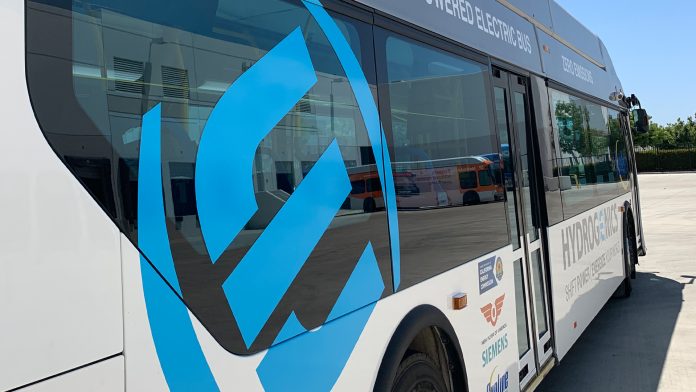 Hydrogenics’ hydrogen fuel cell solutions are fleet-ready and proven at scale, in the field; and across a wide range of applications.

With 70 years of experience, Hydrogenics is helping to accelerate a global shift to cleaner energy by delivering technologies for onsite hydrogen generation and fuel cell power modules and systems for commuter buses, freight and heavy duty trucks; and train fleets.

Hydrogenics’ fuel cell solutions are fleet-ready and proven at scale, in the field and across a wide range of applications. Moreover, the company’s expertise extends to other critical areas of deployment, from fuelling infrastructure to producing industry-leading electrolysers which can generate clean, emission-free hydrogen onsite.

Since its first projects in 2003, Hydrogenics has helped transit operators and vehicle integrators manage smooth transitions to hydrogen-powered solutions. Hydrogenics prides itself on providing customers with the key ingredients for success: proven technology, focused execution; and committed customer service.

Hydrogenics has managed over 30 separate bus initiatives and projects in countries including Canada, China, Germany, Italy, Spain, the UK and the USA; and has ongoing supply contracts for thousands of future bus deployments.

In China, Hydrogenics fuel cells are currently powering the world’s largest fuel cell bus fleets. Deployed in Zhangjiakou, Hebei Province, at the site of the upcoming 2022 Winter Olympics, these buses provide transportation services for over one million passengers a month. Each day, these vehicles work over 14 hours and drive 250km, with each vehicle consuming only 6.7kg of hydrogen for every 100km of service. They are expected to exceed over 6.8 million kilometres in their first year of service.

Fuel cell buses are electric buses powered by both an electric battery and a hydrogen fuel cell, providing all the benefits of purely battery-powered vehicles but without many of the limitations. They convert onboard hydrogen into electricity to recharge optimised, lightweight batteries and power quiet, reliable electric motors. Given that hydrogen has a much higher energy density by weight than batteries (more than 3.5 times), it provides a lighter power source then a strictly battery solution; and is capable of carrying a greater payload over long distances.

The technology has numerous merits in comparison to traditional fossil fuels as well as contemporary battery powered systems. For example, it produces zero emissions at the tailpipe; extending to zero-emissions from well-to-wheel if the hydrogen is generated from renewable power sources. Moreover, this technology has the range of over 500km (300 miles) before needing to refuel, with fuelling taking under 10 minutes. It has a greater fuel economy compared to diesel or compressed natural gas and requires no en-route recharging infrastructure. The hydrogen fuel cell weighs less than conventional batteries allowing for more passenger capacity; fuel cells can be refurbished, recycled and re-used; and there is consistent power delivery in both cold and hot environments.

Hydrogenics has been integrating hydrogen fuel cells into vehicles for decades with HyPM™-HD power modules; and most recently launching a new third generation HD50 power module for heavy duty trucks and buses at the Fuel Cell Expo in Japan earlier in 2019. HyPM-HD power modules produce DC power in standard outputs ranging from 30kW to 180kW per module. Their compact design allows for easier integration and provides a robust and flexible platform with no compromise in vehicle performance.

Powering change in the transportation sector

One of the key market drivers for utilising hydrogen as a fuel source is the need for deep decarbonisation of our economies. Governments, experts and industries have acknowledged the need to move towards producing net zero carbon emissions by 2050, which is extremely challenging. This means a clear trend towards direct electrification of transport, heating and industry using more renewable energy. The transportation sector is among the highest contributors to greenhouse gas (GHG) emissions and pollution worldwide; for example, an intercity bus running 16 hours a day can emit as much as 50 tonnes of CO2 per year.

An effective way to achieve deep decarbonisation in the transportation industry is to opt for hydrogen solutions, particularly hydrogen fuel produced from renewable power using water electrolysis technologies. When powered by renewable energy sources electrolysers can produce green hydrogen which is renewable and emission-free at the point of generation and at the point of use within fuel cells, providing a clean well-to-wheel solution.

Hydrogen can be produced 24/7 onsite at the refuelling station using an electrolyser hydrogen generation system, or it can be trucked in from a remote hydrogen production plant. As most coach and intercity buses travel from bus depot to depot, a refuelling station can be built onsite. Hydrogen refuelling stations avoid many of the dilemmas facing all-battery electric buses. All-battery electric buses occupy charging points up to 80 times longer than a hydrogen refuelling point, requiring a lot of space, a lot of charging points; and increased pressure on the local electricity grid, which may require additional generation and infrastructure to accommodate.

Hydrogenics fuel cells power a wide variety of mobility applications on land, sea, and air. The company is the supplier to the world’s first and largest passenger hydrogen fuel cell train fleet, in which over 40 trains are ordered as an alternative to electrifying routes currently served by diesel trains in Germany. Hydrogenics fuel cells power freight, delivery and public sanitation trucks throughout Europe and North America. The company’s systems have been integrated into boats and ports in the US; and in 2018 Hydrogenics was selected to design and supply fuel cell power modules for a new lightweight vertical takeoff and lift aircraft which promises to revolutionise the way people travel.

Hydrogenics has always been mindful that the fuel cells are only a part of the solution for fleet operators. The fuel itself need careful consideration. Hydrogenics has developed and installed more than 500 hydrogen generation systems globally, including the first-to-market scalable proton exchange membrane (PEM) electrolysis electrolyser. This past year the company was awarded a contract to design, build and install a 20MW PEM electrolyser system, considered the world’s largest, which will produce around 3,000 tonnes of hydrogen annually.

It is this diversity and range that differentiates Hydrogenics. Hydrogenics is one of the only hydrogen companies that specialises in both sides of the hydrogen equation, developing generation systems which produce hydrogen, as well as fuel cells which convert the hydrogen back to electricity for a variety of applications. The technology is ready, the environmental goals are set and Hydrogenics can make it go. The time is right – are you ready?