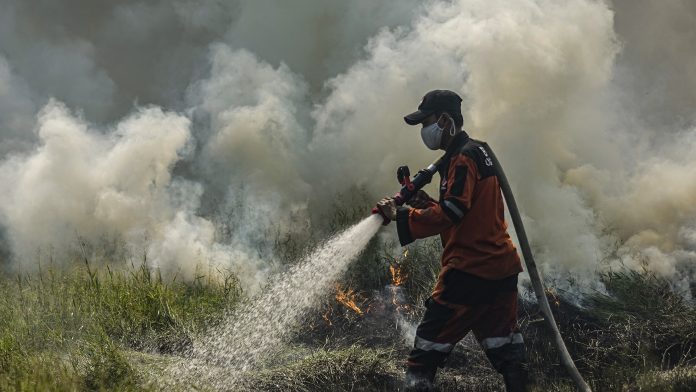 Peatlands are found in at least 175 countries and cover 3% of the world’s land area. They are terrestrial wetland ecosystems, in which waterlogged conditions prevent plant material from decomposing. As a result, the production of organic matter exceeds its decomposition, causing a net accumulation of peat.

Tropical peatlands in South-East Asia, that contain large below-ground carbon stocks and peat swamp forests, are rich in unique and endangered biodiversity, according to the study published this month, March 2022, in the Journal of Applied Ecology. Indonesia’s peatlands are drained to cultivate palm oil, which as a result can increase fire risks.

This new research proposes the ecological benefits of restoring Indonesia’s peatlands by re-wetting them, as it can result in better oil yields as well as conserving biodiversity and reducing risks of fires.

“Our study helps shed light on options to improve the sustainability of cultivation on peatlands,” commented Conservation Scientist Eleanor Warren-Thomas, lead author of the study. “Smallholder producers in our study are managing to grow oil palm under much wetter conditions than typically reported from peatland oil palm.”

The research was conducted by the Indonesian Center for Agricultural Land Resources Research and Development and Jambi University in Indonesia, and the University of York and Zoological Society of London, in the UK.

There are 14 million hectares of peatlands in Indonesia, accounting for practically 23% of the world’s total. They are predominantly discovered on Borneo and Sumatra islands.

The study assessed peatland restoration activities in Indonesia, including re-wetting cultivated peatland areas by blocking drainage canals, and evaluating the maintenance of water levels on drained peatlands, and how these influenced the viability of the oil palms cultivated by farmers.

Fruit production of oil-yielding palm trees decreases with prolonged flooding, which is why peatlands are drained with canals in Indonesia and other oil palm growing countries in South-East Asia. However, draining can cause the peat to emit carbon and make the dry peatlands prone to fires. This can lead to increased carbon emissions and toxic haze, threatening the lives of local people and wildlife.

Restoring drained peatlands involves a ‘rewetting’ process whereby canals draining water away are blocked or filled in, reducing the likelihood of the peatlands catching fire, said the researchers.

“Having the soil wetter will reduce fire risk, slow subsidence and carbon emissions — but in the long term these processes will still continue,” explained Warren-Thomas. “We strongly encourage other peatland oil palm producers to share their data on production and water tables to further our understanding of this issue.”

Muh Taufik, a researcher at the IPB University in Bogor, Indonesia, and who was not involved in the study, noted that rewetting peatlands will have ecological benefits for the environment. “This study provides evidence to balance the economy, livelihoods and ecology by maintaining water tables close to the surface.”

Peeyush Soni, an associate professor at the Department of Agricultural and Food Engineering at the Indian Institute of Technology, Kharagpur, concluded: “The development of large-scale oil palm plantations on peatlands needs serious consideration to minimise negative impacts to the environment and economic losses due to subsidence.”