Dr. Carlos Ziebert, Leader of The Batteries – Calorimetry and Safety group at the Karlsruhe Institute of Technology’s Institute of Applied Materials – Applied Materials Physics, outlines how the group’s involvement in national competence clusters, is helping to create safe and sustainable batteries for the future.

The group has recently received funding for the two national projects AnaLiBa (Analytics of Lithium-lon-Batteries) and BatgasMod (Modelling of Battery Gasing), both of which will run for three years with the possibility of a further extension.

The projects are part of the AQua (AnaLiBa) and BattUse (BatgasMod) competence clusters, funded by the Federal Ministry of Education and Research (BMBF), under the umbrella concept of a Battery Research Factory.

There are four clusters – part of the German government’s master concept research factory for battery cells – with 40 research organisations and universities participating across the board. There is no direct industry involvement, but a management board of industry representatives review the projects and offer advice.

AQua, which stands for analytics and quality assurance, consists of 12 projects, which have received a total of €20m in funding from the BMBF. The cluster, which started in September last year, is focused on intelligent cell production and the quality assurance in the production of battery cells. It is developing a comprehensive cross-process understanding of the properties and structural relationships between materials, manufacturing sets, and electrochemical characteristics.

The scientists are jointly developing analytical methods and standards that consider the complex processes taking place in a battery, with the ultimate aim of developing an analytics and quality assurance platform along the entire value chain, from the materials to the electrodes, to the cell production to the entire cell. This should ensure a faster transfer of the research at the material level into commercial applications, as well as a reduction in costs because there is process optimisation in the production with guaranteed performance characteristics.

This cluster is co-ordinated by the Centre for Solar Energy and Hydrogen Research Baden-Württemberg (ZSW), KIT, and the Technical University of Munich.

The BattUse cluster is dedicated to battery usage concepts and strives for a deep understanding of the different battery states and behaviour. It aims to find the optimal timing of first and second usage of batteries and is focused on the second life of cells that have been used for a certain amount of time in an electric vehicle, and whether they can still safely be used afterwards in applications such as stationary storage.

This cluster is coordinated by the RWTH Aachen University, KIT, the Technical University of Munich and the Fraunhofer Institute for Silicon Technology, and also received €20m in funding.

The Batteries – Calorimetry and Safety group’s role within the clusters

The Karlsruhe Institute of Technology was identified by the coordinators of the clusters as one of the relevant actors in the field of battery safety research, and Dr Ziebert participated in four proposals two of which – AnaLiBa (analytics of lithium-ion batteries) and BattGasMod (focusing on the modelling of battery gassing) – were successful.

The AnaLiBa project is coordinated by the Fraunhofer Institute for Chemical Technology, and the second partner is the Centre for Solar Energy and Hydrogen Research Baden-Württemberg. The BattGasMod project is led by KIT, and the other partners are the Institute for Power Electronics and Electrical Drives at the University of Aachen, and Münster Electrochemical Energy Technology, at the University of Münster. 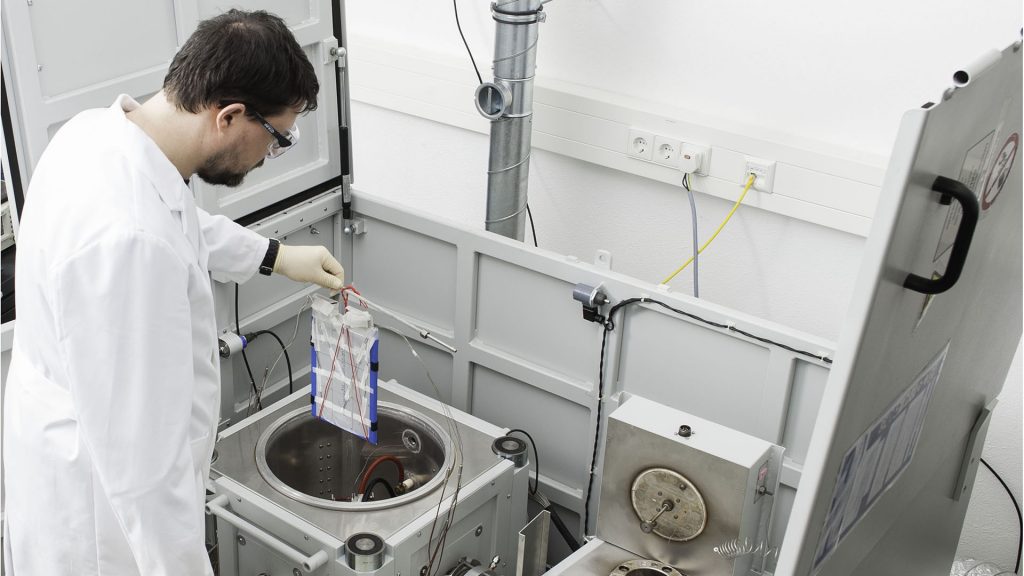 The aim of the BatGasMod project is to develop electrolyte ageing models in combination with battery models for the value prediction of the cell behaviour in the usage phase. The Batteries – Calorimetry and Safety group’s work focuses on two areas. On the one hand it is doing extensive battery colorimetric measurements – Dr Ziebert’s speciality – and investigating how much heat has developed in the cell when it is charging, discharging and also being used for a long time.

KIT has dedicated instruments where the group can measure very sensitively how the heat generation is changing over the lifetime of the cell, and these are important parameters, which will then go into the battery modelling part. The group is also trying to better understand the changes and the decomposition mechanisms of the electrolyte in the battery which is still not fully understood. This is not implemented in the current available battery models, but is very important because the decomposition of the electrolyte is the main reason for the battery ageing, and this decomposition of the electrolyte also leads to a certain formation of gases inside the cell. These gases then increase the pressure inside the cell which the group can measure in its calorimeters.

All of this will finally make it possible to understand, in detail, the decomposition of the battery electrolyte and the effects of ageing, and so improving battery safety, and enabling lithium-ion batteries to operate for much longer, which then increases their sustainability. 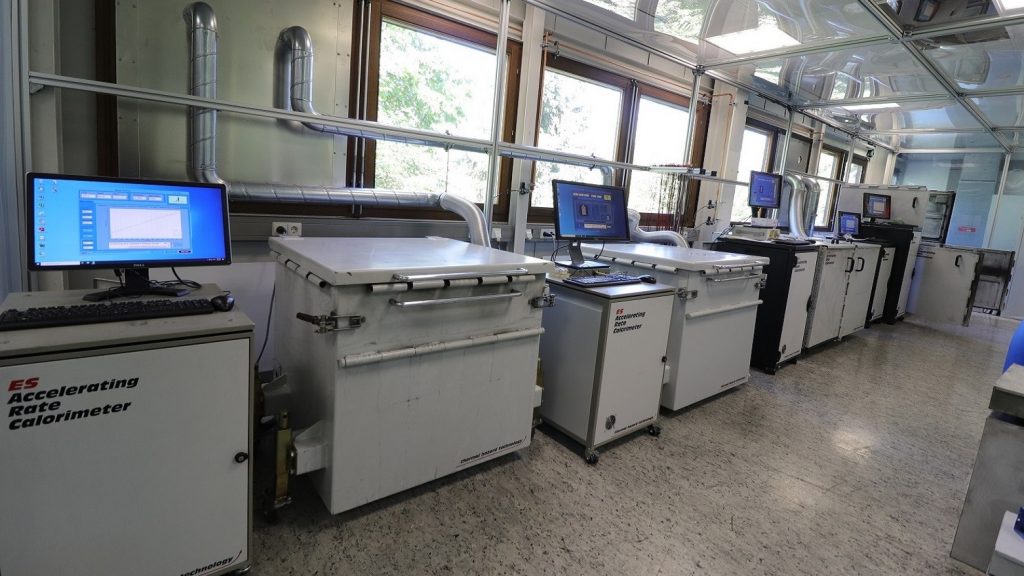 In the AnaLiBa project, the main aim is the joint method development of a standardised sample handling process for the gas analysis of large cells.

Under normal conditions, in ageing and especially, if the cell is abused, there is the large formation of gases in the cells, and it’s important to collect and analyse these gases to know what processes have been going on in the cell. This is the main goal of the AnaLiBa project –to connect KIT’s calorimeters to methods that allow the analysis, in detail, of the gas composition and the ratios of the different amounts of gases that are evolving.

Early assessment of the safety aspects is critical, especially if you want to introduce new material combinations. The group is trying to use its calorimetric measurements to provide further information on how critical reactions are triggered, and then safer operating step strategies can be defined for the cells of the next generation.

Safety critical defects are not that common but can still occur and when they do, they can be quite dangerous, because there are a lot of lithium-ion cells in a battery pack, and if one cell goes into thermal runaway due to critical defect, then the thermal runaway can propagate to the neighbouring cells leading to a cascading effect which can destroy the complete battery pack.

So, even though safety critical defects are rare, they need to be understood, controlled, and measured, so that if one cell goes into thermal runaway, you can prevent the thermal runaway from propagating further.

The work that the group is doing around battery degradation is important, for ensuring a strong battery sector for the future. If you can use batteries for 10 years in a car and then for another several years in a stationary application – to store surplus energy from wind or solar farms, for example – then they become more sustainable, even if the cells are still expensive. If you have solar cells on the roof of your house, you can, in principle, use a rack of cells that have been used before in an electric car, and you can store any excess energy from your solar cells, or you can sell surplus energy to the energy provider.

Economic benefits of the battery sector

The battery sector is very important to Germany’s economy because the automotive industry is the heart of German industry and must successfully lead the transformation from conventional cars to electric cars, but it seems that they are still a little behind, when compared to the likes of Tesla, for example, even if they are starting to increase the pace.

It is also important to develop cell production capacity in Germany, so it is not dependent on countries such as China, Japan or Korea.

The same is true for the European economy. There is now the Green Deal and there is the European Commission’s ‘Sustainable and Smart’ mobility strategy, which aims to have 30 million zero emission electric cars on the roads by 2030.

It will not be possible for Germany to have enough cell production capacity, and, therefore, it should be a European goal to establish battery production.

There is, of course, the European Battery Alliance, which is trying to do that.

So, the work being done within these clusters could ultimately have implications outside of Germany for the European battery sector as a whole.

The role of wastewater-based epidemiology in fighting against viral diseases

Floating offshore wind energy opens up an ocean of possibilities

Unravelling the mysteries of the unknown and dark Universe

The Center for Cosmology at the University of California, Irvine, is on the frontier of discoveries of the nature of our cosmos – such...
Read more

The James Webb Space Telescope will revolutionise our understanding of the atmospheres of planets found orbiting other stars. Since the first detection of a planet...
Read more

Professor Wick Haxton from the University of California Berkeley discusses neutrino experiments past and present and explains how solar neutrinos may also come to...
Read more

Professor James P. Vary from the Department of Physics and Astronomy at Iowa State University explains how supercomputers are revolutionising weather forecasts and predictive...
Read more