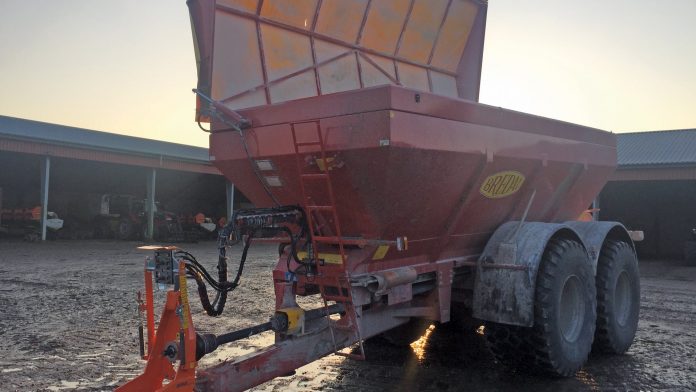 With more than 14 million farmers and its trade being placed at around €19bn, agriculture in Europe is a very important sector. However, agriculture is also one of the most hazardous sectors, with non-fatal work-related accident rates estimated to be 1.7 times higher than the average, and the number of fatal occupational accidents estimated to be three times higher than the average.

Most of these accidents occur during operation, maintenance and repair of machinery and equipment, where power take-off and contact with machinery attachments – known as hitching – are one of the main causes. Modern farm tractors provide most of the muscle power needed for today’s high output agricultural enterprises and are the most common piece of equipment on farms.

Despite receiving 40% of the total EU budget each year, the farming sector is in a constant state of crisis; agriculture in Europe is facing one of the worst crises in decades – producer prices have dropped, and input costs are soaring. Moreover, the sector faces another big challenge: availability of the workforce. Over the last decade, the number of farmers declined by 25% (33% in the EU-13).

Therefore, to keep up demand whilst remaining sustainable, mechanisation is key. “Continued investment in innovative farm mechanisation measures is a key component to promote agricultural productivity in Europe in the coming years and to ensure food security, stability and sustainability.” With autonomy’s arrival into agriculture, SIWI® presents its automated hitch system, a solution which could dramatically increase productivity and safety levels on farms.

Agriculture in Europe is one of the world’s leading producers of food whilst guaranteeing food security for over 500 million European citizens. It produces an annual output value of €400bn in the EU-28, 71.4% of which is produced by large and very large farms. These farms are prevalent in the United Kingdom (26%), Denmark (33.2%), France (37.5%) and Germany (37.8%).

Tractors are more common on farms than any other piece of equipment. The EU is one of the major tractor markets, registering more than 150,000 new tractors registered annually in the last decade and with an annual sales value of more than €7bn. Tractor sales in the EU are highest in Germany and France, with each selling around 35,000 units. Italy and the UK are ranked in third and fourth place, with 23,000 and 15,000 tractors sold respectively. Sweden, Finland and the Netherlands have annual sales corresponding to 4,000-5,000 units. Tractor sales in those seven countries correspond to 81% of all sales in the EU-15.

A traditional approach to hitching

Before the 1940s, most hitching of trailers, or tools, to tractors was done with a drawbar, on the same principle as a modern tow hitch. The drawbar was a flat bar with holes in it, whilst the implements – trailers – had tongues which attached to the drawbar via a pin. Whilst the pieces used have evolved since then, becoming more elaborate, the action of hitching still remains manual. Some attempts have been made to make the hitching process automated; however, only a few semi-automatic hitches can be found on the market, and they are only available for small machines.

Three types of connection exist between tractors and implements:

The difference between the three methods is the vertical force transferred between the implement and the tractor, which concerns the amount of control that the tractor operator has over the implement. The three-point hitch specifications were standardised in the industry by the American Society of Agricultural Engineers (ASAE S217) and, later, the International Organization for Standardization (ISO 730-1).

However, this system presents advantages and disadvantages; the system allows complete control of the implement, which is desirable. To this end, electronic systems are increasingly used to control tractor sub-systems – for example engines, transmission, implement hitch, external hydraulics and driveline – and to monitor or control certain implements. However, current systems operate autonomously, relying entirely upon the operator for co-ordination, which is undesirable.

Hitching a tractor to trailers or tools, a task done several times a day on a farm, is currently done manually, which can cause accidents and injuries. According to the US National Institute for Occupational Safety and Health, farmers and other workers that use tractors are at risk of severe injury or death if proper hitching methods are not correctly applied when towing or pulling objects with tractors. Moreover, the current manual hitching approach is not only unsafe, but is also very time consuming!

Without an automated hitch system, each hitching can take around 15-20 minutes. Under the global trend which sees an increasing demand for food – predicted to reach between 59% and 98% by 2050 – and less willingness shown by new generations to farm in Western countries – where there has been a reduction of around three million workers since 2013 in Europe – automatisation is key to maintain or improve productivity, reducing the need for personnel, but also making the work safer and more comfortable to retail as well as attracting new farmers.

The SIWI solution: the only fully automated hitch system

To couple or uncouple a towing vehicle, a tractor, for example, with any tool or carriage, the hydraulic hoses, electrics and power transmission operation (PTO) must be connected and disconnected from both systems. We have developed SIWI, an automated hitch system which enables the tractor driver to stay in position at the tractor seat, instead of manually performing coupling and uncoupling between the implement, carriage and the tractor. Moreover, the operator doesn’t need to be anywhere near the connection, reducing safety risks. With SIWI, a trailer change can be performed in under 30 seconds, whilst the tractor can be connected to a trailer or tool in less than five seconds!

When the tractor module is as far back as possible, the operator lifts up the module and becomes hitched. To ensure the trailer module does not disengage during driving, there is a safety lock system which holds both systems together. When both modules are levered correctly, the operator connects the PTO, hydraulic, electrical and pneumatic connections via the control box inside the cabin. Once everything is greenlighted – indicating that it is safe – the operator can continue work.

The SIWI automated hitch system can be used for several applications, such as in trailers and tools. The system consists of two modules, depending on the needs of the farmer, whether that be a tractor and trailer module, a machine module for use in harvesters, or an implement or tool module.

SIWI outperforms manual solutions in relation to safety, comfort, efficiency, economics and on environmental performance. Semi-automatic solutions are limited to small machines by comparison and follow a different approach.

The advantages of the SIWI system

An automated approach to hitching

The SIWI fully automated hitching system is based on a unique and patented configuration of three key hitching elements: hydraulics, electric and PTO. All hydraulic couplings, power plug and PTO are in a holder, operated with a small hydraulic piston which locks and unlocks the device.

Our automated hitch system is suitably designed so that the complementary coupling parts of the second component, whether that be trailer or tool, are arranged at a distance above the mechanical draw coupling between two upright arms. These arms are positioned downwards, in a way relative to the mechanical draw coupling. Therefore, the arms can be pivoted in the opposite direction to the implement and carriage, as they are held in a vertical position by means of tension springs. As a result, coupling or decoupling the system requires an additional single-double acting hydraulic outlet.

The SIWI automated hitch system is also built in modules. This modularity means that we can mount any tool in the hitch hook – it does not matter whether it is provided with or without a ball rack, or whether it is electric or forced steering.

Today, we supply directly to both farmers, contractors and agriculture machine distributors. Distributors sell an all-in price formula, including solution, installation and maintenance to farms. When we supply directly to farmers or contractors, the SIWI installation team goes on site to install and provide training. However, we are not big enough to make direct sales, installation and maintenance in the long term. In this respect, we have already engaged with potential distributors of agricultural machinery in France, the UK, Belgium and Japan.

Our company, SIWI Maskiner, started in 2006, primarily to develop a smart automated hitch system. Four years ago, the founder envisioned the need to develop the first automated hitch system. Since then, there have been several prototypes. The first fully automatic hitch hook was shown at Agromek –northern Europe’s largest agricultural expo – in 2012. At that time, only the lift and hydraulic hoses were automatically switched on and off.

In 2015, we patented the technology at a European level for a hitch device between agricultural Implement/carriage and tractor and soon after achieved a CE mark. A year ago, the company sought support in commercial and marketing activities, hiring a sales and marketing director. The company has had success; our first prototype attracted the sale of more than 40 units and has raised great interest amongst industry.

Our goal with the support of the European Commission, through Horizon 2020, is to finalise our product in order to achieve its uniqueness and implement its industrialisation, allowing us to grow and meet market demand. Our vision is to become the leading company for hitching systems and to see SIWI become a must-have for all large- and very large-scale farms in Europe.