Creating a ‘value economy’ for the European cultural sector 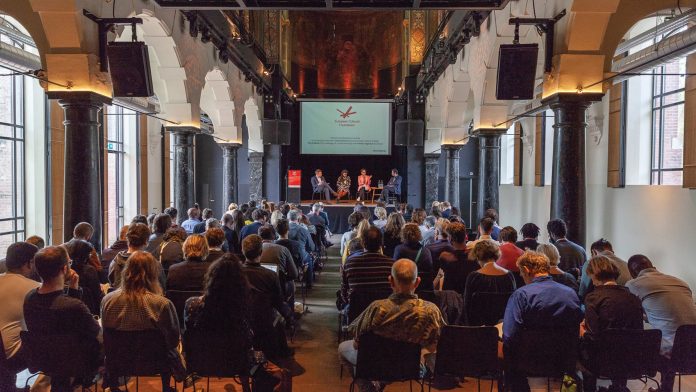 Caroline de Gruyter reports on the first European Cultural Challenge 2018, and discusses the need for lobbyists to represent the European cultural sector.

Economics focuses too much on growth and efficiency, and too little on values. The European cultural sector, traditionally a source of social change, can help to restore the balance. There is one problem however: the sector may have plenty of ideas but lacks political influence, particularly on the national and European levels. ‘Cultural lobbyists’ and strategic funding are therefore urgently needed.

This is the main conclusion of a high-level discussion among economists, social entrepreneurs, artists and academics from all over Europe, organised by the European Cultural Foundation (ECF) on 15-16 May in Amsterdam, the Netherlands. Since its inception in 1954, the ECF has assembled ‘reflection groups’ on many topics that touch or should touch on culture.

This time, the group was asked to reflect on the role of values in the economy. The initial question was: how can we envisage and strategically influence a more culture-driven framework of economic policy-making in the long run? Is there a possibility that economics becomes “value economics”, as the Polish economist and former politician Jerzy Hausner advocates? In Hausner’s view, economics traditionally has had both a social side, rooted in philosophy, and a scientific one, rooted in exact science. But “while both traditions should coexist, the former has been almost eliminated from mainstream economics.”

Which cultural strategies should be pursued to make sure economics is not just concerned with efficiency and growth, but also with the quality of life and development?

The discussion was moderated by international lecturer, researcher and writer Nora Bateson. She proposed to use the Warm Data Lab process that she developed, which allows groups to open up a subject through the perspective of a variety of contexts that pertain to it. She divided the group over four tables, to explore economics and culture in four different contexts: education, ecology, health, and politics. Participants were encouraged to change tables from time to time. The last wrap-up session was a collective one.

An economical and ecological approach to culture

Participants agreed that the words ‘economy’ and ‘ecology’ stem from the same Greek word oikos, meaning ‘house’. They discussed ecological measures in several European countries, and how they seem to thrive when people think there is money to be made out of them. So when the government steps in, private money usually flows in soon afterwards. In Spain, for example, solar and wind energy were booming as long as the government invested in it. However, as Diego Isabel, executive director of the Wellbeing Economy Alliance, remarked: when the financial crisis hit, state funding severely shrank. As a result the private sector mostly withdrew, too, leaving the European cultural sector underfunded.

In Norway one can see investors keen to put their money into ecological projects; here, too, the government often takes the lead. In countries or regions where the government does not consider the ecology a priority, local initiatives are often crucial. The question is how they can be strengthened, and by whom.

The discussions on health and education also focussed on the role of governments, and the changing balance between the private and public sectors. In the health sector, the trend is clearly towards privatisation. Hospitals, for instance, are merged into big conglomerates to be more efficient. This may benefit citizens who live in cities.

In the countryside, however, access to healthcare is becoming problematic. There is also less and less public money in schools, leading to a loss of quality. In some countries the ‘good’ universities are now private ones. Increasingly, citizens feel that education and healthcare do not serve the community as they once did – and as they should. These developments lead to an erosion of trust. Everything is becoming more globalised, more commercial, and harder to influence on a local level. How do we bring the European cultural sector – and other similar sectors – back into the public service and within democratic reach?

Bringing health and education back to the public sector

The answer seems to lie in many local initiatives that have recently been set up across Europe to take back control. The new citizen groups ruling the Spanish cities of Barcelona and Madrid were mentioned, as were Norwegian citizens demanding that oil platforms be used for fish-farming in the future. Dutch economics professor Arjo Klamer, who was once an elderman in the Dutch town of Hilversum, even mentioned a local way of tackling a dog-poo problem which brought together two neighbourhoods that were completely at odds.

Likewise many participants had heard about – or had themselves been part of – local projects in cities or neighbourhoods to take matters into their own hands. All emphasised that the issue is not just about (re-)adding value to the economy, but on a deeper level also about how to make democracy meaningful again. Over and over, participants emphasised that democracy is not just about voting once every few years. It is also about being alert and active and trying to influence policies on a more permanent basis. If citizens want to change the economic paradigm, so that it serves the common good again and not just those groups with money and power, they must be democratically more involved. “Those in politics are permanently behind the curve,” said Pawel Potoroczyn, President of the Polish University of Social Sciences and Humanities.

The crucial word in most debates was ‘empowerment’. All agreed that at the local level many democratic projects are set in motion – but these projects need to be connected to the national and European levels, where many important decisions are taken nowadays. Many participants said that what is missing most at the moment, is good intermediaries to connect these local initiatives with European policy-making. In Brussels, banks and the pharmaceutical industry are much better represented than citizens, because industry has the means to hire lobbyists. European institutions also invite groups of citizens or consumers, to give input and advise when new laws are written. But European officials say these citizen representatives are hard to find. Non-governmental organisation’s (NGOs) which do this kind of advocacy have specialists for one or two issues only, and don’t have the means to hire a lobbyist.

In the field of culture there is clear movement now to fill this lacuna. ECF has long advocated for culture to be positioned at the heart of the European Union’s external relations, and now works – amongst other things – with the European Commission and other partners on an EU strategy for international cultural relations. This could be vital for the European cultural sector, and similar should be done in other sectors, too.

A new organisation called ‘The Good Lobby’ is trying to help citizens to find their way to Brussels and to connect them with experts if needed. But according to the Brussels activist and former banker Aline Fares, a financial citizens’ lobby in Brussels called Finance Watch that was set up a few years ago to counter the powerful financial lobby in Europe on behalf of citizens, has not managed to influence EU policy enough. Fares, who used to work for Finance Watch herself, said that despite good efforts it has been a “disappointment” in some ways.

Therefore the group concluded that better and stronger intermediaries are needed, as this link between citizen’s initiatives and political decisionmakers is vital. And, last but not least, these intermediaries need to be much better funded than they are today, to maximise the support they can provide to the European cultural sector.