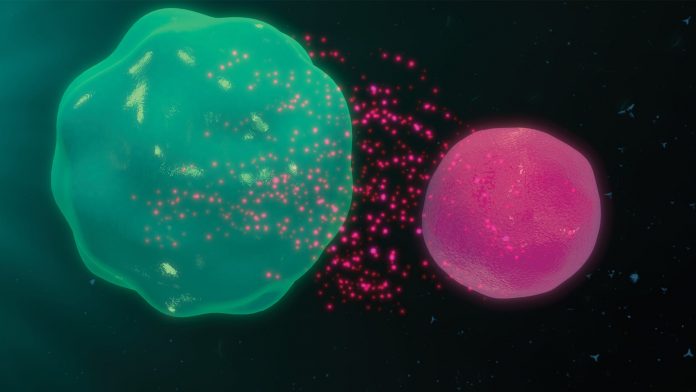 The immune system is a highly complex network of cells, tissues and organs that work closely together to protect the body from infection. When specific guard cells of the immune system detect foreign invaders, a cascade of synchronised chemical reactions is initiated that activates a range of different immune cells, and initiates secretion of immune-mediating components, including cytokines and antibodies to attack, kill and eliminate these pathogens. Two key capabilities are required for the immune system to successfully complete this important task:

In an autoimmune disease, the immune system mistakes parts of the body such, as joints, tissues or specific organs like skin, as foreign, and starts to fight them using a full range of the immune defences. While in some cases the autoimmune disease targets only one organ, like the pancreas in Type 1 diabetes, in other cases, such as with lupus, the whole body is affected.

Ypke van Oosterhout, founder and CEO of Dutch company Xenikos, might have found what patients suffering from often life threatening autoimmune diseases and their physicians are urgently looking for – a new treatment option that has the potential to “reboot” the immune system and bring it back to normal. T-Guard, currently in late-stage development for the treatment of patients with acute graft versus host disease (GvHD), following allogeneic stem cell transplantation, might be the answer. In a Phase 1 and 2 clinical trial, the drug showed profound in vivo T and NK cell depletion, followed by a rapid recovery of the immune system. This reaction started right after the last T Guard infusion, with increasing T and NK cell numbers and a diverse T cell repertoire that was not accompanied by a recurrence of the disease, suggesting a rebalancing of the immune system to a tolerogenic state.

Why does autoimmunity appear to be triggered by a variety of factors?

Researchers are not yet able to explain why, in some cases, the immune system spins out of control, although it is known that some people are more likely to get an autoimmune disease than others. For example, according to the US National Institutes of Health National Library of Medicine, women contract an autoimmune disease more than twice as frequently as men – 6.4% of women in the US compared to 2.7% of men. In addition, some autoimmune diseases seem to be more common in certain ethnic groups: lupus, for example, affects more African-American and Hispanic people than Caucasians.

Some autoimmune diseases, such as multiple sclerosis and lupus, often occur within families. Environmental and lifestyle factors are also thought to play an important role in triggering autoimmunity. These include increased exposure to chemicals and solvents, and an unhealthy diet of high fat, high sugar and highly processed foods. Another theory is that, because of an excessive focus on cleanliness and the increased use of antiseptics, children today aren’t exposed to as many germs as they were in the past, causing the immune system to overreact to harmless substances. However, none of these theories have been proven.

Today, more than 80 diseases caused by the immune system attacking the body’s own organs, tissues and cells have been identified. Some of the more common of these diseases include:

Current medications for these diseases, including nonsteroidal anti-inflammatory drugs and immunosuppressants, are typically directed at alleviating symptoms and managing pain, rather than curing the underlying condition. The long-term use of many of these medicines can cause significant side effects.

A new treatment strategy to reset the immune system

As autoreactive T cells seem to play a crucial role in the development of most life-threatening autoimmune diseases, a relatively new treatment strategy aims to reset the body’s immune system through self- or donor-derived blood stem cell transplants. In the absence of the original antigenic triggers, immune homeostasis is restored and self-tolerance can return. However, this treatment is not always successful and is associated with transplant-related mortality of up to 10%.

T-Guard™ might provide a milder, more specific, alternative treatment option. It is an antibody-based approach for the treatment of patients with acute GvHD, following allogeneic stem cell transplantation. T-Guard is currently being developed by Dutch company Xenikos. Treatment with T-Guard could not only result in omission of transplant-related mortality, but could potentially open up treatment to a much wider patient population.

GvHD occurs in patients treated with allogeneic HSCT through co-transplantation of allo-reactive T cells. These T cells are activated by antigen-presenting cells and induce tissue damage in the skin, gut and liver. GvHD and autoimmune diseases share clinical and pathophysiological similarities, as aberrantly activated T cells play a central role in both diseases.

T- Guard: a potential cure without the risk

T-Guard represents a novel concept for addressing unwanted activities of the immune system. T-Guard is an antibody-based combination product candidate that has the potential to swiftly and safely remove hyper-reactive or misdirected T cells in patients suffering from various T cell-mediated diseases, as well as transplant-related rejection.

The novelty of T-Guard lies in the use of a combination of two immunotoxins that act synergistically to kill target cells. The product consists of two monoclonal antibodies (mAbs), directed against T cell surface antigens CD3 and CD7, which are both individually conjugated to ricin toxin A (RTA).

Both mAbs used to construct T-Guard add unique and important features to its mechanism of action. The anti-CD3 mAb modulates the T cell receptor CD3 complex that plays a central role in the antigen recognition process, thereby providing additional immunosuppression independent of the RTA-induced cell killing. The presence of the

anti-CD7 mAb is significant in that the CD7 antigen is upregulated on recently activated T cells, and is less abundantly expressed on

T-Guard is highly specific in killing only the activated T cells; the immunotoxin used in T-Guard contains only the A chain of the highly effective ricin toxin. The ricin toxin B chain (RTB) normally accommodates the binding and subsequent internalisation of RTA into eukaryotic cells, after which RTA irreversibly inhibits cellular proteins, leading to the cell’s death. By replacing RTB with a specific mAb, the resulting mAb-RTA conjugate binds to and eliminates only those cells that express the target antigen. Bystander cells are left unharmed as the crippled RTA toxin is not able to enter the cell on its own and needs the mAb as a transfer vehicle into the cell before it can exert its deleterious effect.

T-Guard showed a complete clinical response of 50% on day 28. The one-week treatment course resulted in profound in vivo T and NK cell depletion, followed by a rapid recovery of the immune system, starting immediately after the last T-Guard infusion. Increasing T and NK cell count, and a diverse T cell repertoire, suggest a rebalancing of the immune system. US and EU Phase 3 registration trials for the treatment of steroid-resistant, acute GvHD are planned to begin in 2019.

Based on the promising results seen thus far in patients with GvHD who received allogeneic stem cell transplants, particularly T-Guard’s ability to kill activated T cells, Xenikos believes that T-Guard might also be used to treat people with T cell-derived autoimmune diseases, especially those who are either newly diagnosed or who are known to have a propensity for such diseases. It is believed that T-Guard could delay, or potentially even replace, the use of blood stem cell transplants for these patients. Xenikos has plans to further explore the potential of T-Guard in treating autoimmune diseases, as well as to provide people suffering from these severe and often fatal conditions with an alternative, potentially even curative, approach.