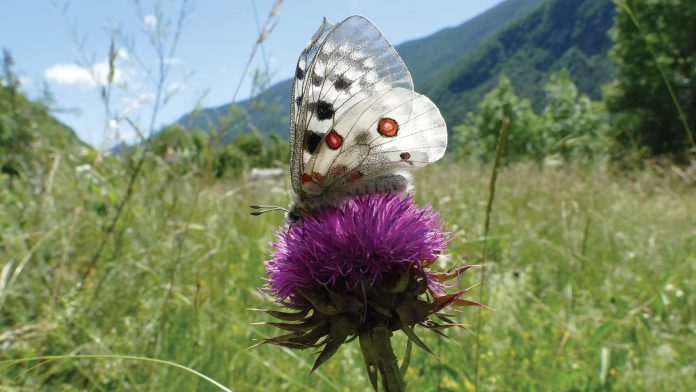 Butterflies and moths are vital indicators of the health of Europe’s biodiversity and a new project is helping to get a clear picture of butterfly data across the continent.

Insects underpin the entire ecosystem, as well as playing a vital role in our economies; providing food sources for larger birds and mammals, pollinating crops and flowers and maintaining good soil health. In order to understand the health of Europe’s biodiversity and any changes that it might see in the future, data collection is vital. Looking in detail at what insect species are in decline can help us to understand the bigger picture; and moth and butterfly data in particular can act as an indicator of the overall health of local biodiversity.

We spoke with Dr Martin Warren, Head of Development at Butterfly Conservation Europe, about how the initiative will help to inform policy at a European level and why butterflies and moths are important indicators for the health of Europe’s biodiversity.

What does the picture look like for Europe in terms of biodiversity? How much have butterflies declined in recent years?

All the evidence shows that biodiversity is in real crisis across Europe – including bird and plant species. The focus has now turned to insects because new data has come out: for example, a study in Germany showed a 70% decline in insects in terms of total numbers. The data we are gathering on butterflies and moths is going to try and fill in the picture so we can figure out what can be done to improve the situation. Currently, about 10% of Europe’s butterflies are threatened with extinction and many more are threatened. The biggest declines are in Western and Central Europe.

So far, we’ve only been able analyse trends of widespread butterflies on grassland. We found that 17 species have declined by 40% since 1990 across Europe. Our data is based on accurate counts of butterflies from thousands of different sites and highlights that European grasslands are deteriorating rapidly. They are either being intensified through fertiliser and herbicides, or they are being abandoned. Both are really bad for biodiversity.

Moths fly at night so they are not understood as well as butterflies, as people cannot go out and count them easily during the day. However, we know that a very similar picture is going on with them. There are good data from the Netherlands, Finland and the UK. We know that the total number of moths has declined by a third; and as they are food for both birds and bats, this is quite serious.

What does the ABLE project consist of? How does it build on current butterfly conservation and who is involved?

The ABLE project is run by BC Europe, which is an umbrella organisation that brings together different organisations from all across Europe. At the moment we have 15 countries that have existing butterfly monitoring schemes where thousands of volunteers go out once a week and collect butterfly data from specific sites. With this project, for the first time we are going to bring together all that data for all species. Most of the data we have is from Central and Western Europe – we know far less about what is going on in Eastern European countries and Southern areas around the Mediterranean. In the project, we are hoping eventually to get data from near enough every European country to build an accurate picture. Our focus is on developing new monitoring schemes in Eastern and Southern European countries.

What are the risks posed to butterflies and moths from climate change and why are they both so important to the health of biodiversity?

Climate change is having a complicated effect on nature. It enables species like butterflies and moths to spread North to regions which were previously too cold for them. Roughly about a third of all species are now spreading North – so there is a mass movement going on. What we are really worried about is the two thirds of species which live in special places such as certain mountain ranges – they can’t migrate and can’t jump from one mountain range to another. These species are the ones which are really threatened by climate change. They are going to lose their habitat. Moths or butterflies that live on a mountain will move further and further up the mountain as it gets hotter. To give one example, in Sierra Nevada, Spain, there are four butterflies which are only found there in the world and they are right at the top of the mountain. We know that is going to get too hot for them and they will just become extinct as they can’t go anywhere.

Butterflies are so valuable as butterfly data can indicate what is going on for other species as well as the fact that they are a staple in the food chain for other species of animals. There is lots of evidence that bird decline is linked to insect decline, and likewise with bats.

Climate change is not going to be stopped anytime soon and will carry on until we reduce CO2 levels. Many European countries are working hard on emissions reduction and leading the way, but with biodiversity there is not an awful lot we can do. We can, for example, make sure that protected areas are diverse and that we respond with management changes. There is some scope for species to adapt if we can give them time to change.

How will the project examine the impact of EU policies and initiatives, such as the Natura 2000 network of protected sites and the Common Agricultural Policy?

What we hope to do with this project is provide a good enough data source that we can monitor how policies are working. We want to look at how policies are impacting on butterflies and therefore other insects. We are working with DG Environment and DG Agriculture to give them feedback and ideas for improvement.

There are big positives – EU officials have funded this project, so the data is wanted. We have a method of actually measuring if policies work – this is very powerful. Butterflies respond quickly to change so if the environment gets better then they will have a better chance of survival. Many rare species have done very well under agri-environment schemes which are partly EU-funded. If we can get these schemes right, we can help other insects and birds. Climate change is causing a big overall impact but if we can get the habitat in as good condition as possible, populations will be much more resilient. This is the hope – that we can maintain bigger populations which are more resilient to the changes that are going on. We have already turned around the decline of many species in the UK because of better management on protected areas, so we know it can be done.

The great thing about butterfly monitoring is that most of it is done by volunteers and there are at least 5000 people across Europe monitoring butterflies, week in, week out. We have got online data entry tools that we are developing, and we are going to have a phone app – that means that all this research can carry on and people can continue to enter data beyond 2020. We still want more countries to join in and can provide some training and help. This means that the data will get better and better every year and we can learn more about what is happing. Grassland is an especially important habitat across Europe, so we are looking at how these environments are changing as well as in woodlands and wetlands. We are also hoping to develop a European Urban Butterfly Indicator, based on the successful one developed in the UK. With this data we can pinpoint what factors are having the biggest impact on butterfly declines and suggest solutions.

One of the things we are hoping to work with is the European Pollinator Initiative as there is a big concern about the decline of pollinators. Butterflies are a good way at looking how pollinator populations are changing so we are hoping to use this butterfly data to monitor pollinators across Europe as well. There is a direct economic link between insect populations and food production. If we lose insects, we lose flowers – nature is all interlinked, so we need to maintain all of its different components for it to function properly and butterflies are one way of looking into that complicated world.

The European Grassland Butterfly Indicator report can be downloaded at www.bc-europe.eu/index.php?id=325.