In the past, Float Europe proposed the Offshore Floating Ocean Energy System (OFOES) in a near shore configuration which, in reality, reduces the productivity ranges of the OFOES. Combining wind and wave activities offshore in deep waters would permit Ireland to progress significantly and so achieving the country’s agreed upon European renewable energy goals for 2030 deadline would be all-but assured.

What does this mean?

Additionally, to obtain the maximum return on wave capture/conversion, the application of the Trident Energy Power Pod is able to work in combination with the Float Incorporated Rho-Cee Wave Energy Converter (see: http://floateurope.eu/technology/rho-cee-wave-energy-converter-pc; and http://www.tridentenergy.co.uk/wpcontent/uploads/2014/01/Trident-Energy-Linear-Generator-Datasheet.pdf).

Where will it be situated?

However, as a result of more detailed information and research, Float Europe now proposes an offshore deep waters application for Ireland that can respond to the country’s requirements for meeting their European 2030 renewable energy goals in advance, as well as assuring the possible expansion of the applications in order to respond to increased electrical demands when required without interruption of existing production means.

Ireland’s western offshore zones coincide with the Rockall Trough – having limited navigation and fishing zones – but having the continuous wind and wave activities to respond to Ireland’s demands for electricity ashore.

Where would the OFOES platforms be situated in the Rockall Trough?

Overlay with appropriately identified OFOES positioned in the Rockall Trough

By positioning the OFOES to the exterior of Ireland’s Economic Zone but within the European Economic Zone and in/near the Rockall Trough, the prevailing wind and wave activities are more than sufficient to obtain an increased source of both wind and wave energy combined and captured/converted onboard the OFOES platforms to be transmitted ashore.

The benefits of different locations include:

What are the additional positive aspects of emplacement in the Rockall Trough?

1) Winds and waves are more constant with few variables, which would be taken into consideration in the design phase of the OFOES candidate site-specific design;

2) Tourists visiting thec west coastline of Ireland would have not be able to see OFOES or wind turbines;

3) Total employments onboard the OFOES platforms would exceed 50,000 personnel;

4) Float Europe also proposes the use of additional activities:

a) An LNG terminal (per OFOES) to ensure baseload electricity as well as potable water; LNG could also be an emergency option to produce electricity for ashore use.

b) For OFOES, the purchase of a cruise liner to act as employee living accommodations as well as relaxation and infirmary needs;

c) Helicopter landing zones on each OFOES to permit rapid evacuation when needed;

5) Survivability is one of the most predominant features of the OFOES as the Pneumatically Stabilized Platform (see: http://floateurope.eu/technology/pneumatically-stabilized-platforms-psp)is designed for each candidate site and those specifics to that site;

a) The Rho-Cee Wave Energy Converter system also acts as a ‘buffer to reduce/compensate for heavy sea activity as well as capture/conversion of wave activity.

The combination of the PSP and the Rho-Cee Wave Energy Converter produces one of the most predominant characteristics of the Float Inc. Offshore Floating Ocean Energy System2 (OFOES) – combined multi-task capabilities, i.e. transport, multiple renewable energy sources (capture; conversion; storage and transmission), aquaculture, and leisure, etc. It also reduces capital investment costs and O&M time, as well as costs by a ‘sharing of costs’ amongst the various primary and ancillary applications supported on the same OFOES, i.e. one transformer station; one anchorage system; one submarine cable ashore.

Individual renewable energy sources capturing/conversion systems require anchorage, electrical sub-stations, electrical cabling systems, and connections which are all incorporated within the Float Inc OFOES. Consequentially, economies are attained via the re-grouping of all individual requirements.

From the Rho-Cee Wave Energy Converter4 viewpoint, the OFOES system provides a ‘terminator’ configuration function. All the targeted wave energy can be harvested along a single, frontal wave line. The OFOES has a large span, measured in wavelengths, and is given a degree of ‘sweepback’ so that the coherent summation of wave forces is avoided, thus reducing the mooring loads (hence cost) and other stresses in the OFOES system.

In terms of energy (power) capture (absorption), the basic design and operating principles are drawn from fundamental wave mechanics as well as cost optimisation calculations. Specifically, that energy transfer between connected waveguides is maximised by providing impedance matching. In principle, when so provided, no energy is reflected or bypasses the junction – it is all absorbed.

The characteristic impedance of gravity waves is simply ‘ρC’ – the product of mass density X velocity of propagation, known as ‘Rho-Cee’. That impedance, the ratio of pressure-to-particle velocity, is a relatively small number and is resistive; that is, the pressure and particle velocity must in-phase. To satisfy these two criteria (small and resistive) the input impedance presented by the WEC absorber must be provided by a resonance, with appropriate linear damping.

In the Rho-Cee, these requirements are met by the utilisation of an L-shaped oscillating water column (OWC) with the submerged horizontal leg opening in the wave front direction, as required to provide the proper phase-in of its impedance. The resistance is provided and controlled by the power take-off (PTO) system and its load – the delivered power.

The sizing & configuration of the OWC’s (typically, three are geometrically nested to provide an economically viable frequency (period) bandwidth using narrower bandwidth oscillators) is based on the principles of vibration and reciprocity, wherein an effective wave absorber would behave as an effective wave generator if/when operating ‘in reverse’.

The Rho-Cee WEC is constructed entirely of steel-reinforced concrete, identical to the supporting PSP platform. It is configured in bays joined by vertical-leeward bulkheads, similarly constructed.

The PTO system5 employs vertically oscillating linear generators. Each is configured as a moving cylindrical collar of pick-up coils enclosing a fixed cylindrical column of permanent magnets. The mechanical impedance provided by these columns is regulated by their associated control systems.

The width of the bays is currently selected in consideration of the integral number of PTO columns required to efficiently provide the load in each, as well as to avoid any rocking motion tendency of the column-resident floats that drive these linear generator PTO columns. 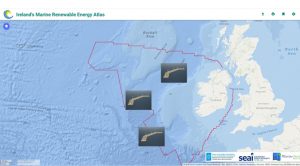 PSP technology characteristics have been validated and confirmed. These include: