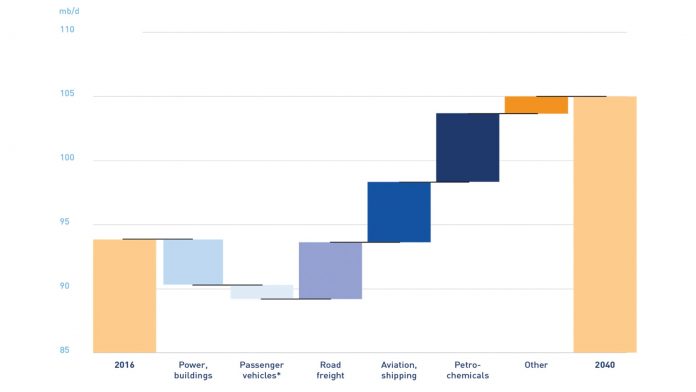 The EU established a goal in the framework of the Paris Agreement to lead the world in addressing global climate change. The European refining and distribution industry is committed to contributing to the achievement of this objective, which will require a fundamental evolution of the energy needed and the way it is used in all sectors of the economy. Currently, forecasts for global demand for low-carbon liquid fuels for transport, petrochemical feedstock and other uses are expected to increase until at least 2040 according to the International Energy Agency (IEA) in its World Energy Outlook (WEO) 2017.

The IEA’s WEO 2017 assumes that EU oil demand will decrease between 33 and 56 per cent by 2040, mainly in transport due to predicted efficiency gains in different transport sectors and initial penetration of electric vehicles into the passenger car fleet. This forecasted overall growth nevertheless shows that low-carbon liquid fuels remain the main – and in some cases – the only option for specific transport modes.

Petroleum liquid fuels have an unrivalled energy density and are easy to transport, making them an ideal means to carry and store energy. While alternatives are being developed for some of their current uses (e.g. in passenger cars where electrification is expected to play a important role), liquid hydrocarbons are difficult to replace in heavy-duty and marine transport, in aviation and as a feedstock for the petrochemical industry.

Battery technology will need to achieve at least a tenfold reduction in weight in order to become a viable substitute for liquid fuels beyond passenger cars and light commercial transport. No breakthrough of this magnitude in battery technology is foreseen in time to impact the composition of the transport fleet by 2050. Therefore, it is unlikely that a single option – a silver bullet – will deliver low-emission mobility across all transport segments. Instead, many technologies will be needed; and it will be essential to develop effective industrial co-operation in Europe, supported by the right research and development frameworks. This will be the most effective way to deliver sustainable, low-emission fuels for use in next-generation efficient engines – such as low greenhouse gas (GHG) intensity oil-based fuels, biofuels, synthetic fuels and power-to-liquid.

A study conducted by Ricardo focusing on light-duty road transport in the EU assessed the potential effects of the widespread use of low-carbon liquid fuels in highly efficient conventional vehicles. The energy share for the low-carbon liquid fuel scenario would consist of 68 per cent of liquid fuels (54 per cent biofuels and 14 per cent e-fuels); complemented by 23 per cent electricity and one per cent fossil fuels. The high electric vehicle (EV) scenario, based on a projected 100 per cent battery electric vehicles registered from 2040 onwards, should reach almost 90 per cent of electricity supply complemented by nine per cent fossil fuels, with the remaining share represented by biofuels.

This study shows that by 2050, a scenario based around low-carbon liquid fuels could potentially reduce greenhouse gas (GHG) life-cycle emissions by 87 per cent of their 2015 values. When compared with a high electric vehicles scenario, Ricardo concludes that the high EV scenario does not enable higher emission reductions: the two cases are thus approximately equivalent in terms of GHG reduction. The study also finds that the low-carbon liquid fuels scenario requires a much lower cost for public finance with regards to EV charging and network infrastructure, €390 billion vs €830 billion for the high EV scenario.

With regards to the cost for society, the total annual costs of vehicles under the high EV scenario or under the low-carbon liquid fuels scenario is likely to be very similar with no competitive advantage for the EV. All of the tested scenarios are very ambitious, but it is clear that using a wider range of technologies than electrification alone can reduce the risks of resource constraints on achieving the GHG reduction goals.

Low-carbon liquid fuels offer a sustainable alternative to full electrification of light duty vehicles and an attractive solution to other transport sectors such as aviation, marine and heavy duty road transport. They also offer the opportunity to be supplied to the entire existing fleet as they appear on the market and by doing so, enable a wider GHG reduction compared to the gradual penetration of EVs.

The vision of significant deployment of low-carbon liquid fuels is very ambitious, but expert work shows it is both achievable and beneficial. The vision for full electrification is also very ambitious and faces major challenges, plus significant uncertainties on key assumptions, which need to be addressed. Low-carbon liquid fuels need to be part of the Vision for 2050 of the EU, Member States, industry, their investors and customers.

Both sets of technologies are complementary and require the adoption of policies based on a neutral approach to technology support: this will lead to the best choices and decisions for the future of the EU.

In the full electrification scenario, resource requirements for cobalt, nickel and lithium would increase very substantially over the period to 2050; posing a potential availability risk and creating a new import dependency of the EU. Given that the majority of lithium and cobalt is located in a few countries, there is furthermore a potential risk for prices and security of supply.

The refining industry is already engaged in a low-carbon transition

The refining industry is working on new sources of low-carbon liquid fuels but in many cases the development and deployment phases will take time. The EU refining industry is well placed to evolve its business model consistently with this objective, by increasingly using combinations of new feedstocks – such as biomass and vegetable oils, waste and captured CO2 in very efficient manufacturing.

The industry can also expand its use of renewable electricity and hydrogen onsite and further exploit synergies with other industries in integrated clusters. The flexibility and resilience of the refining industry infrastructures, including those for the distribution of products, will allow this transformation to occur at a comparatively low cost and with immediate benefits in terms of CO2 reduction.

The EU refining industry is already engaged in a low carbon transition, through investments in research and development projects and the early deployment of new technologies. These technologies, which have already been proven at different technology readiness levels, need to be implemented at scale. Innovative solutions will allow the use of new feedstocks and will cut GHG emissions from refineries as well as from the use of their products. In the process, the EU could develop and reinforce its global leadership in low-carbon technologies, by exporting them around the world where they are needed.

To unlock investments in low-carbon technologies, the policy framework should enable investors to be remunerated for their risk capital. The current regulations in energy and climate lack long-term predictability and stability, are sectoral rather than holistic and all too often deviate from technology neutrality.

The following measures for an evolutionary trajectory of the regulations on fuels and vehicles could be proposed:

During the low-carbon transition, due to the high cost of innovative technologies, appropriate measures should be taken to safeguard the international competitiveness of EU industries and avoid the offshoring of manufacturing activities.

Share
Facebook
Twitter
Linkedin
Email
Print
Previous articlePolicy solutions online: how governments can learn from each other
Next articleSmart BIM: digital transformation for the construction industry