Saving our rivers from oil with River Cleaning

Oil spills can have a devastating impact on the environment, affecting animals and disrupting the balance of ecosystems but River Cleaning hopes to keep these disasters at bay with its innovative technology

We are always looking to innovate at River Cleaning, and as part of our continued efforts to reduce the amount of harmful pollutants seeping into essential waterways, we have created the River Cleaning Oil 2.0 – an enhanced version of our pre-existing device that intercepts and traps floating oil pollutants on the surface of water.

The innovative technology initially used for the oil plug-in which was mounted on the River Cleaning Plastic device has been further developed and repurposed for a new, more efficient product. In fact, compared to the first model that was presented in our recent Innovation Platform article, the new River Cleaning Oil 2.0 is equipped with much more extensive and all-rounded capabilities. The aim behind this innovative product is to help alleviate small to large-scale accidents, such as oil spills, that could cause extreme environmental destruction. It could greatly benefit areas with high volumes of maritime traffic such as the Suez and Panama Canals which, in 2019 provided a conduit for 14,000 ships. 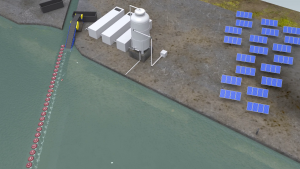 The change of paradigm brought forth by River Cleaning Oil 2.0 is ground-breaking: while the first River Cleaning Oil solution is best suited for permanent deployment in watercourses where oil pollutants are discharged frequently in small to medium quantities, the second has been developed to tackle oil spills of varying scales, ranging from small to natural, disaster-sized oil dispersions.

Though River Cleaning’s new device clearly has different capabilities compared to its predecessor, the core features remain unchanged. The system can be scaled and adapted to fit the needs and dimensions of every river while also ensuring the navigability of the watercourse and thus the possibility to maintain regular marine traffic. Those characteristics are key for the whole system to function. In fact, the River Cleaning Oil 2.0 would perform most effectively if it was installed before the occurrence of a natural disaster, to be activated and deployed immediately should the need arise.

How does it work?

The solution consists of self-positioning, autonomous, floating devices, whose shape is designed to intercept waste floating along the river. Oil filters, referred to as ‘skimmers’, are mounted inside the buoy modules, ensuring that the oil pollutants are properly sucked in and redirected through a network of pipelines to a centralised system on the shore. There, the mixture of water and oil undergoes several treatment phases: firstly, a series of containers separate water from pollutants, purifying it through multiple stages; then, clean water re-enters the river in a specific site located before the device barriers, so that it can be filtered again. 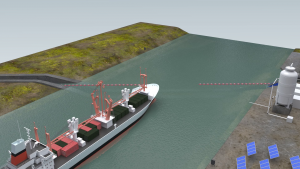 Furthermore, it is important to highlight that, just like River Cleaning Plastic, Oil 2.0 has a low environmental impact and does not interfere with the life of local plants and animals. For this reason, not only is a pacific coexistence possible, but the system could also prove beneficial to the marine ecosystem by providing protection against environmental destruction.

The issue of oils and combustibles pollution

Every idea comes in response to a need, and River Cleaning Oil 2.0 was a necessary step to respond to the large amount of oil pollutants discharged in waters every year, and to tackle the damage caused by massive oil spills whenever these incidents occur. It is currently estimated that around a thousand tonnes of oil end up in the oceans on a yearly basis. Among the related issues is the poisoning of species (both animals and plants), reduced mobility for animals, the pollution of marine deposits and irreversible changes in the balance of the ecosystems, like the disappearance of the most vulnerable creatures.

Under no circumstances are combustibles and oil pollution to be underestimated, but it is in riverine and marine ecosystems that the threat could be greater than ever. In fact, pollution spreads faster in water compared to land (where animals can be kept safe thanks to containment measures).

River Cleaning as a company, and all its team members, dedicate a great amount of time and energy to developing new solutions that can offer immediate, concrete responses to the ever-increasing environmental crisis created by water-based pollutants. Our innovative systems could prove tremendously impactful and beneficial if implemented successfully in local, as well as global strategies.

It is through joint effort, and the dedication of everyone, that we will achieve cleaner seas and a sustainable, radiant future.