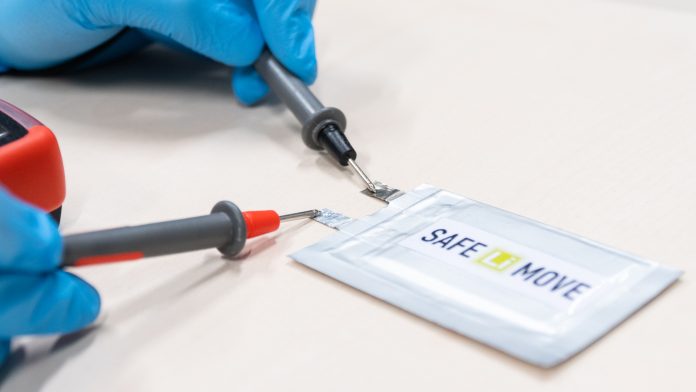 The SAFELiMOVE battery project is leading the way to develop safer solid-state batteries for electric vehicles. Led by CIC energiGUNE, here they explain their latest achievements.

The solid-state battery of the electric vehicle of the future is currently at a decisive stage. The different technologies competing to lead the electric mobility market are involved in a silent but definitive battle. In fact, the major vehicle manufacturers are taking part in this race, investing large amounts of resources (primarily financial) in the main technological players in the sector.

It is difficult to know the outcome, but it seems clear that the winner will have to provide an efficient response to four major issues: safety, range, charging time, and, of course, price.

CIC energiGUNE has been working for more than ten years – since it was launched in 2011 – taking steps in the identification of a technology that answers all the questions to the highest level of satisfaction. In this sense, the research centre’s commitment to solid-state batteries has led them to be one of the top three institutions in Europe in the field of energy storage. This was led by researchers such as Michel Armand, the pioneer of today’s lithium batteries and father of solid-state batteries with polymer electrolyte.

This experience and knowledge allow CIC energiGUNE to be one of the leading players in the research and development of the batteries of the future, being an active participant in some of the major international initiatives currently underway in this regard. One of the most outstanding, led by CIC energiGUNE itself, is the SAFELIMOVE battery project.

SAFELiMOVE battery: a project born from the European Union’s commitment to electric vehicles

The European Union aims to be a benchmark in the battery sector for electric vehicles, aspiring to be responsible for 30% of battery production by 2030 and to have at least 30 million electric vehicles on its roads by the same year.

In this context, a project like SAFELiMOVE appears, promoted by Europe under the umbrella of the Horizon 2020 program, to position the European industry in a global battery market that will generate €250bn per year, at continental level, from 2025.

Through these types of initiatives, Europeans will be able to meet the challenges and needs of their automotive industry, which will need gigafactories close to its production plants with the capacity to meet a demand of 400Gwh, by developing and building the batteries of the future in Europe.

Furthermore, it should not be forgotten that transport is responsible for around a quarter of the European Union’s greenhouse gas emissions, more than two-thirds of which come from road transport. The development of advanced batteries to power electric vehicles, such as the one proposed by SAFELiMOVE, is essential to reduce carbon emissions and achieve European ecological and economic sustainability while, at the same time, strengthening the electric transport supply chain in Europe.

Through this collaboration of some of the leading agents in the sector, SAFELiMOVE seeks to offer substantial competitive advantages, such as increasing driving range by an additional 300km on a single charge, reducing charging time, increasing safety by eliminating the potentially flammable liquid electrolyte, and lowering the cost of the battery by 50%, thanks to the use of highly efficient materials and processes.

For this purpose, the SAFELiMOVE battery project counts on the participation of companies specialised in materials development, such as:

In this way, the technology developed by SAFELiMOVE is expected to make achievements in the following aspects:

A battery cell is very much defined by the materials and the interaction of materials within the cell. For this reason, the development of a set of advanced battery materials is, therefore, one of the core activities within the SAFELiMOVE project.

The individual material properties already define the cell’s potential in terms of energy density and cycling performance. However, what is even more important is the interaction of the materials with each other in the complex environment of a battery cell.

To meet this challenging task, Schott, Umicore, Hydro Quebec, Abee, and CIC energiGUNE cooperate in developing materials, which will be adopted to each other for effective lithium transport. The material development is done in three steps, and after each step, the new materials are evaluated by means of interphase phenomena and cell behaviour.

Despite all COVID-19 limitations, the first milestone was reached on time in July 2020. An initial set of materials comprising the new polymer and oxidic electrolytes, NMC cathode material and an ultrathin lithium metal foil was developed. The materials were characterised and checked for compatibility. Fabrication in lab-scale was established, and the materials were provided to other project partners for further characterisation and cell fabrication as they will be the basis to guide future improvements to next-generation materials.

The successful development of these materials enabled the consortium led by CIC energiGUNE to achieve the second milestone: the fabrication of the first batch of coin and mono-layer pouch cells.

These mono-layer pouch cells were assembled using the materials developed by the partners. The next step was to use these cells for interface characterisation and electrochemical testing, which is currently ongoing.

The feedback on comprehensive testing of delivered coin and mono-layer solid-state cells is guiding the development of improved next-generation solid electrolyte and active SAFELiMOVE materials, as well as the optimisation of the cell design and tailor the cell manufacturing procedure.

But this is only the beginning. If the project estimations are met, the batteries developed within the framework of SAFELiMOVE will offer a higher energy density of 450 Wh/kg (which translates into greater autonomy in the use of electric vehicles), faster charging (thus reducing waiting times) and a longer service life (thereby boosting savings and sustainability). As a reference to understand the expected qualitative leap thanks to the new generations of battery technologies such as the ones developed at SAFELiMOVE, a conventional battery currently offers densities of around 250 Wh/Kg, which is almost half of what is expected with these new developments.

Our research will mean that electric vehicles using SAFELiMOVE solid-state batteries will be more competitive thanks to their greater autonomy, faster charging and improved safety. These benefits will increase their market share and contribute to the objective of decarbonisation of transport in the European Union.

In this regard, the first results obtained after the first year and a half of SAFELiMOVE’s work promise a largely satisfactory end result, thus having the foresight to achieve the objectives with which the project was born. Work is now continuing with a view to December 2023, the end date of the project, when it is expected to be able to offer a technological solution that will meet the expectations generated and enable the energy transition of the future; a great desire but also a challenge for the European Union.

Researchers have developed a new method to extract magnesium from seawater to assist the US’ transition to clean energy.
Read more

AFCP has executed a letter of intent with Progressus to develop an industry-leading clean hydrogen joint venture project.
Read more