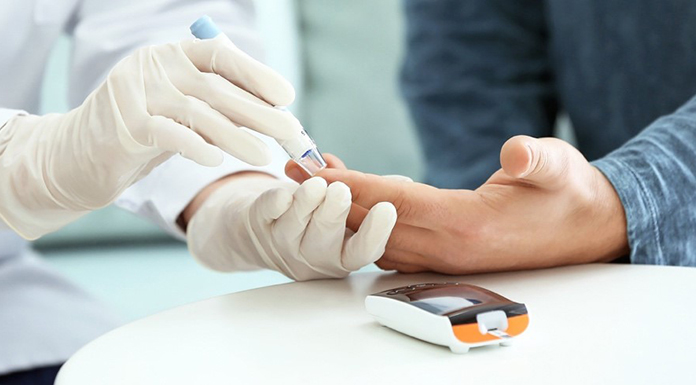 Pharmaceutical producers can count on the innovative FUNDAMIX® Vibromixer to maximise yield in insulin production.

Insulin crystals are polymorphic, ranging in size from 50-100 microns. These crystals are subject to degradation if exposed to high shear forces. FUNDAMIX®, with its low shear force, is the perfect solution for insulin production – keeping insulin in a homogenous suspension without degradation of its active enzyme structure. Mixing of the batch is achieved down to just a few mm above the tank bottom, reducing heel to an absolute minimum.

The rise of diabetes

The number of people with diabetes has risen from 108 million in 1980 to 422 million in 2019. This number is predicted to double in the next 20 years, according to the World Health Organization (WHO). It is not surprising therefore that the pharmaceutical industry is currently investing billions of dollars to increase production capacity to cover the continually-increasing demand for insulin.

Synthesising human insulin is a multi-step biochemical process that depends on basic recombinant DNA techniques. One small segment of human DNA carries the code for the protein insulin. Manufacturers manipulate the biological precursor to insulin, so that it grows inside simple bacteria cell suspension.

Insulin is a protein which is provided by the pancreas to remove excess glucose from the blood. When this regulatory mechanism fails (i.e. diabetes) it needs to be provided via medication, usually in the form of injections. Currently, most of the insulin is produced in vitro via genetically engineered yeast or bacteria. They produce human insulin in a pure form which is less likely to cause allergic reactions.

Genetically engineered cells are cultivated in a bioreactor where they produce the insulin. When fermentation is terminated, the cultivation is harvested, and the bacteria filtered off. The cell mass is then broken up to release the insulin. Finally, the insulin goes through purification steps to extract the pure product. As insulin is broken down in the digestive tract, it needs to be injected into the blood stream. This means that the demand for purity is very high. Additionally, the concentration of insulin within each vial must be very precise in order to prevent under or over dosage.

Due to these requirements, preparation of the product before dosing into vials is a major task and requires a series of mixing steps. 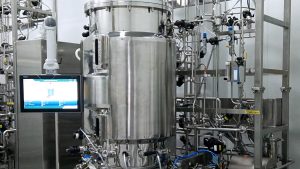 After extraction, insulin is crystallised and the suspension containing the crystals is transferred to a vial filling station. Proper mixing of the insulin suspension is critical to maintain a homogeneous concentration until the very end of the process, at which time the vials are filled.

In order to assure homogeneous concentration during dosage preparation, the insulin mixture must be well agitated. However, it is a known fact that shear forces can easily denature the protein, resulting in its deactivation.

The physical changes accompanying the denaturation process involves the early agitation-induced aggregation of the proteins with final fibrillation.

The FUNDAMIX® Vibromixer is proven to be the best equipment on the market to prevent such denaturisation while simultaneously assuring effective mixing. It has the ability to move large volumes of liquid without affecting the sensitive proteins. The vibrating action induces a high degree of random distribution without baffles and at very low shear effects on the proteins.

With the absence of any rotating part, FUNDAMIX® allows complete isolation of the sterile medium from the environment and hence is ideally suited for this task. With a simple membrane sealing which is mechanically fixed to the shaft you are assured of an absolutely sterile environment. There are no requirements for a mechanical seal or a magnetic drive. 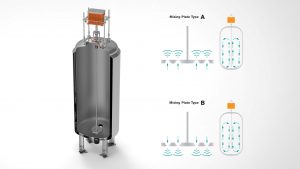 Another major advantage of FUNDAMIX® for insulin producers is low heel volume resulting from the capability of positioning the mixing plate at the very bottom of the mixing vessel. Since the mixing plate can be installed much lower than the impeller of a rotating mixer, the non-mixable residual volume of each batch is minimised, and product waste is virtually non-existent. Insulin producers can count on FUNDAMIX® Vibromixer to maximise yields.

With conical bores facing upwards, Type A is the preferred standard. It has higher efficiency due to upward flow through the whole vessel. The plate can be mounted very low, so the mixable heel volume is reduced to a minimum.

Mixer type B with conical bores facing downwards is chosen if the product tends to sediment, creates foaming, or if no air is to be introduced during mixing. The distance to the bottom of the vessel is approximately the diameter of the plate.

Share
Facebook
Twitter
Linkedin
Email
Print
Previous article€5.37m to improve the sustainability of aquaculture in Denmark
Next articleNASA’s new Moon missions will involve drilling for water below the surface