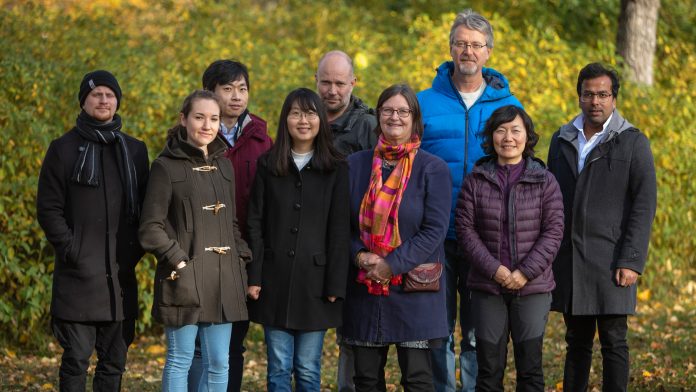 A five-year study into the mechanisms by which cancer cells become mobile and start spreading has implications for the way in which aggressive prostate cancer is treated in the future.

Previous studies into the aggressive spread of cancers, including prostate cancer, have shown an overproduction of TGF-β, which regulates how cells grow and specialise in many cancer forms. High levels of TGF-β are strongly linked with poor prognosis and low survival rates because the growth factor stimulates cancer cells to spread in the human body, causing life-threatening secondary tumours. TGF-β regulates the expression of the protein Smad7, an active component in the TGF-β signalling chain; and in healthy cells, Smad7 can prevent continued TGF-β signalling via negative feedback.

The team behind the study, led by Professor Maréne Landström at the Department of Medical Biosciences at Umeå University, includes former postdoc students Noopur Thakur and Anahita Hamidi; PhD and postdoc student, Jie Song; Susumu Itoh, a Professor at the Laboratory of Biochemistry, Showa Pharmaceutical University, Japan; Anders Bergh, a Professor at the Department of Medical Biosciences at Umeå University, and Professor Carl-Henrik Heldin from Uppsala University, Sweden. Professor Landström explains how the research conducted by her team has revealed that, in cancer cells, Smad7 can reinforce the development of tumours by regulating the gene expression of HDAC6 and c-Jun. The findings of the study could be used to develop more precise treatment strategies for aggressive prostate cancer in the future.

What were the drivers for the study and what questions did you hope to answer?

The study originated with the hypothesis that Smad7 could take an active part in gene transcription in response to the TGF-β stimulation of prostate cancer cells, as we had previously made the unexpected original finding that Smad7 could shuttle between the nucleus and cytoplasm. When the Smad7 gene was found, Smad7 was classified as an inhibitory Smad; this meant that it could inhibit TGF-β signalling.

Why are high levels of TGF-β strongly linked with poor prognosis and low survival rates in certain forms of cancer?

High levels of TGF-β have been shown to correlate with poor prognosis for patients affected by many different kinds of cancer. TGF-β transforms normal epithelial cells to become mesenchymal, migratory, and invasive. TGF-β also promotes changes in the tumour stroma so that cancer-associated fibroblasts are attracted to become a part of the tumour stroma. Tumour cells produce TGF-β in an autocrine manner. TGF-β is also produced by stromal cells. High levels of TGF-β affect the immune response so that immune cells cannot recognise and destroy the tumour cells.

What is Smad7 and how does it reinforce the development of tumours?

Smad7 is an adaptor protein which can bind to the TGF-β Type I receptor activin like kinase 5 (ALK5) to prevent further TGF-β signalling; it can also promote the activation of the TGF-β- TAK1 –p38MAPK/JNK-pathway to promote migratory responses, apoptosis, and the dedifferentiation of cells. We show in our paper (Thakur et al., 2020) that in the nucleus, Smad7 can act as a transcriptional regulator of c-Jun and HDAC6 to promote migratory and invasive responses of prostate cancer cells. How this occurs is not yet fully understood, but I believe that it is through its activation of c-Jun and HDAC6.

What were the main findings/outcomes of the study and how did it show an entirely new function of Smad7?

The key finding of the study was that we could identify two consensus binding sites in DNA for Smad7 for the regulation of c-Jun and HDAC6. Moreover, we could also identify a specific amino acid in the N-terminal part of Smad7 that was necessary for binding to DNA (K102). The fact that we can identify on the amino-acid level that Smad7 can act as a transcription factor is novel knowledge.

Did you face any challenges and, if so, how were these overcome?

We initially sent our paper to an established journal and while we had received very positive comments from our reviewers the journal didn’t accept the paper. It took us some time to get our novel findings accepted for publication in iScience and we expect it to attract a significant level of interest as it reveals a previously unknown function for Smad7.

What implications will the findings of the study have for the treatment of aggressive prostate cancer in the future, and how will this study inform future studies?

We hope that it will add novel knowledge that can lead to better and more precise treatment strategies for patients with prostate cancer in the future and I expect that our study will open a new field of research within the field of TGF-β and tumour biology.

Clinical trials are currently taking place in the UK with the goal of finding specific HDAC6 inhibitors in patients with solid tumours in order to develop future treatments using HDAC6 inhibitors to be deployed alongside existing treatment protocols for patients with hard-to-treat forms of the disease, but we do not yet know the outcome of these trials.